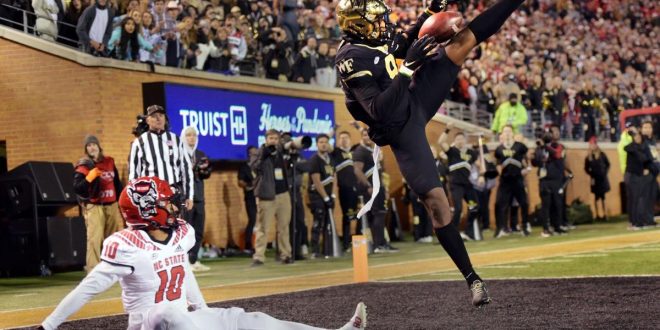 Battle for the ACC Atlantic

In front of its largest home crowd in a decade, Wake Forest knocked off NC State Saturday in a 45-42 shootout to maintain its solo lead in the ACC Atlantic Division. The No. 13 Demon Deacons are now 6-0 in conference action and will face the 5-2 Clemson Tigers on the road this Saturday. Meanwhile, the Wolfpack — who rounded out this week’s AP top-25 — will return to Raleigh to host Syracuse.

Sooners Fall to Baylor in Waco

Tied up at halftime, the Baylor Bears outscored Oklahoma 20-7 in the second half Saturday to hand the Sooners their first loss this season. Baylor’s defense sacked Oklahoma’s quarterbacks five times. Senior linebacker Terrel Bernard led the Bears with nine tackles, two tackles for loss, and a pair of sacks.

Following the game, Oklahoma head coach Lincoln Riley called the loss “disappointing” but expressed his faith in the Sooners’ ability to rebound.

“The advantage of winning your first nine games is you do set yourself up to be able to overcome something like this,” Riley said. “We’ll bounce back like we always do and like we fully expect to.”

After climbing seven spots in the AP top-25 to No. 11, Baylor will head north this Saturday to face Kansas State on the road. Meanwhile, the Sooners — who dropped eight spots in this week’s ranking to No. 12 — will return home to play Iowa State Saturday.

In a top-12 ranked matchup, Ole Miss beat Texas A&M by 10 and improved to 6-0 at home. With just under five minutes to play, Rebels junior AJ Finley picked off Aggies quarterback Zach Calzada and returned it 52 yards for six to put the nail in the A&M’s coffin.

Ole Miss will remain in Oxford this Saturday where it will host last-place Vanderbilt. The Aggies will return to College Station to welcome Prairie View Saturday.

No. 1 Georgia remains undefeated following its 41-17 victory over Tennessee in Knoxville. No. 2 Alabama cruised to a 56-point home win over New Mexico State. No. 3 Cincinnati defeated USF by 17 last Friday in Tampa. No. 4 Oregon won by two touchdowns over Washington State in Eugene.

No. 5 Ohio State avoided another Purdue upset as the Buckeyes ran up the score, 59-31. Ohio State freshman quarterback C.J. Stroud completed over 80% of his pass attempts and matched a career-high five touchdown passes. Following the win, Stroud discussed his chemistry with the rest of the Buckeye offense.

“When they do their job, it makes my job easy,” Stroud said. “When everybody’s on the same page, … I feel like we’re rolling.”

There are three ranked matchups on tap for this Saturday. No. 7 Michigan State will travel to Columbus to play No. 5 Ohio State at noon. The contest’s winner will take first place in the Big Ten East.

Next week: Michigan State at Ohio State
On the line: First place in the Big Ten East pic.twitter.com/mcikU3zHGx

Hi, my name is Griffin Foll and I am currently a senior at UF studying sports media journalism with a concentration in political science. I contribute weekly web and radio content for WRUF ESPN Gainesville and help cover the World Cup/Champions League soccer beat. Be sure to check out some of my recent articles!
Previous Monday Night Football: Rams travel to take on 49ers
Next Florida Volleyball Continues Their Hot Streak 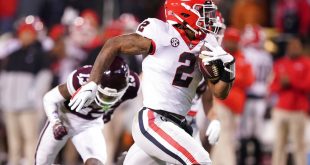 At long last, and with many contenders, the 2022 SEC Championship Game is set. No. …