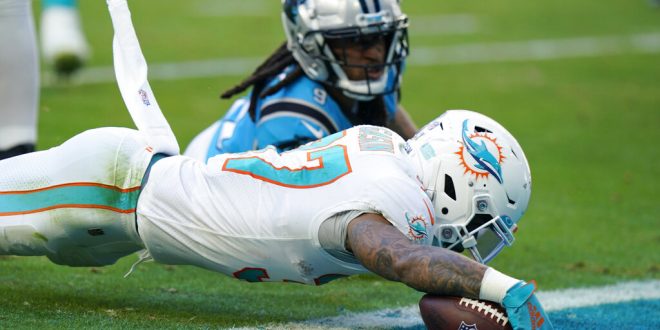 Miami Dolphins running back Myles Gaskin (37) scores a touchdown ahead of a tackle by Carolina Panthers cornerback Stephon Gilmore (9) during the first half of an NFL football game, Sunday, Nov. 28, 2021, in Miami Gardens, Fla. (AP Photo/Wilfredo Lee)

The Panthers surrendered 33-10 against the Miami Dolphins Sunday and sunk to a .417 win percentage. They sit last in the NFC south.

Panthers quarterback Cam Newton rushed the ball into the endzone to bring the game 6-7 with five minutes left in the first quarter — the sight of possible victory diminished soon afterward.

Gaskin on the Offense

Running back Myles Gaskin made his third rushing touchdown in the season four minutes into the second quarter to give Miami a 13-point advantage. He made his second touchdown of the day five minutes into the third quarter off a seven-yard rush to strengthen the leg-up by 16 points.

Miami linebacker Jaelan Phillips came in with a quarterback sack in the red zone three minutes into the third quarter.

With the Panthers on edge, Miami refused to back down. Defensive tackle Adam Butler blocked Newton’s pass to bring a fourth down as Carolina struggled with 34 yards to go. That was just the beginning.

The Dolphin’s defense showed up and showed out against the Panther’s shaky offense.

Panthers wide receiver D.J. Moore brought the team to the red zone after a 47-yard catch from Cam Newton and led the team with 103 receiving yards. Miami’s defense came around only two minutes later with a second interception, this time by cornerback Xavien Howard. Dolphins used this to their advantage as wide receiver Jaylen Waddle scored a touchdown a minute after the pick.

Newton was pulled from the field in the fourth quarter after his third interception and was swapped with quarterback P.J. Walker. Walker proved to not be much better.

Dolphins cornerback Nik Needham dove to the ground at the 38-yard-line to pick a last-minute throw by Walker, who had a .50 completion rate throughout the game.

Strength on the Special Teams

Carolina’s team fell through from the start while Miami’s special teams came onto the field thirsty.  Carolina punter Lachlan Edwards let down the team as his punted ball rolled into the hands of the Dolphins, giving them a touchdown halfway through the first quarter. The Panthers wrapped up the first half with a 31-yard field goal by kicker Zane Gonzalez to bring the score 21-10 Miami.

Jason Sanders kicked a 36-yard field goal four minutes into the fourth to dig a deeper hole for Carolina. With their fourth down and eight yards, Miami played it safe with a 23-yard drive by Sanders to end the game.

The Panthers head into their bye week and the Dolphins take on the New York Giants Sunday.