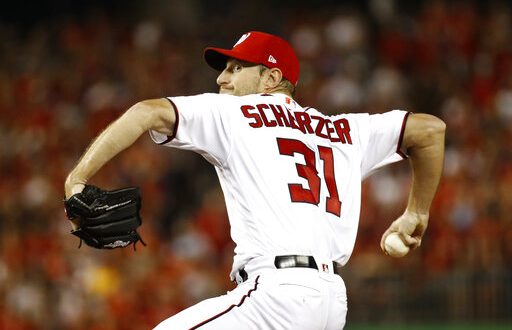 Max Scherzer just signed with the Mets as the highest-paid player in baseball. The new agreement has Scherzer making an annual salary of $43.3 million through 2024.

Owner of the Mets, Steven A. Cohen, said Scherzer is one of the best pitchers of the generation.

His stats back it up. The 37-year-old pitcher has 190 wins under his belt. He also is the only pitcher in Major League Baseball history to have more than 3,000 strikeouts and fewer than 700 walks.

Scherzer said that a part of the reason for his decision to commit to the Mets is Cohen’s commitment to winning.

He said Cohen’s insistence on staying behind his players and trying to get the best for them was part of his choice.

Scherzer said he reached out to the Mets’ other pitcher, Jacob DeGrom, after talking with Cohen.

DeGrom’s perspective on everything was also a factor in Scherzer’s decision as well.

He said he was intrigued by the prospect of pitching with DeGrom and Eduardo Escobar.

The process ending before the lockout was a large part of the rush for the decision.

Scherzer had to heavily consider the possibility of the lockout as a free agent.

After failing to come to a new labor agreement, MLB and MLBPA went into a lockout Thursday morning. This is the first one major league baseball has faced since 1990.

The lockout halted all activity. This could have been an issue in Scherzer’s deal had he not finalized the logistics quickly.

In anticipation of the lockout, $1.4 billion were forked over in the league on free agency contracts.

Rylee is a third year Journalism major with a specialization in sports and media at the University of Florida College of Journalism and Communications.
Previous CFP Board to continue expansion Talks
Next Brian Kelly “can make a significant difference” at LSU