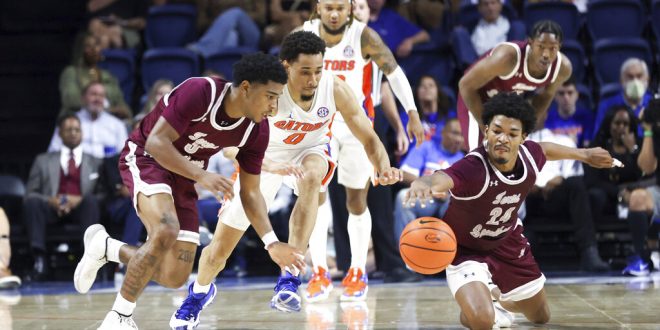 Coming off a disappointing outing against Texas Southern Tigers on Monday, Florida Gators (6-2) men’s basketball looks to get back in the winning column tonight. Head Coach Mike White and the Gators hopes to snap their two game losing streak as they take on North Florida Ospreys at the O’Connell Center.

The lack of effort for the Gators was a telling sign in their poor performance with Texas Southern (1-7). Adding insult to injury, Mondays win gave the Tigers their first win of the season. Hopefully, after achieving the best start under White, Florida get the ball rolling again against the Ospreys.

To continue, a major reset is much needed for White and the Gators as they expect to drop in the next AP Poll.

Florida Gators Getting Back to the Roots

After starting the year with a 6-0 record, Florida now has lost back-to-back games. Nothing more jaw dropping than Mondays night surprising lost to the Tigers. The Gators felled behind 10 points at the half and a 20-point deficit with a little more than four minutes remaining left.

Also, prior to Texas Southern, Florida has only allowed 53.8 points per game. However, a prideful defense has allowed an alarming 71.5 points during their two-game skid. For the game, the Tigers shot 54-percent from the field and 45-percent from three point range.

Senior guard Brandon McKissick mention a lack of focus on the defensive has been a big factors in the teams recent struggles.

Leading in rebounds averaging a near double-double on the season, Colin Castleton led the team with only five rebounds as the Tigers doubled the Gators on the glass with 46. Castleton says a poor effort in practices leading up carried over into the Mondays game.

For Texas Southern, although coming into the game winless, it was clear the level of chemistry displayed as they assisted on 15 of the 31 field goals. White recently mentioned the Gators were outplayed in every facet of the game.

Now, Florida fortune may turn with a win Wednesday against North Florida.

The Ospreys travels the hour-and-half drive from Jacksonville to get their shot at the already down Gator team. Although experiencing an already gruesome schedule to start, the 2-8 Ospreys are battle tested. In losing efforts, North Florida faced off two team in the AP top 10 Poll in UCLA and Kentucky.

All in all, the Ospreys have already played five teams in the Power-5 Conference including two SEC programs.

Clearly, head coach Matthew Driscoll doesn’t shy away from facing top competitions. Wednesday night’s matchup is no different for the Ospreys. Prior to the matchup, Driscoll recently talks about the recent Gators loss to Texas Southern.

North Florida averages 66.5 points per game and 36-percent from behind the ark. The experience for the Ospreys is fairly young, including six freshman’s. Driscoll and the Ospreys hopes to stun the orange and blue for the second consecutive game.

For the series, the Gators are 9-0 when playing the Ospreys, with an average margin of victory of 32 points. However, to avoid another home upset, Florida needs get back to their defensive identity which helped them in their six-game winning streak to start the year.

Florida looks get back on track tonight at home in the O’Connell Center. Live coverage of the game begins on ESPN 98.1 FM/850 AM WRUF at 6:20 p.m.