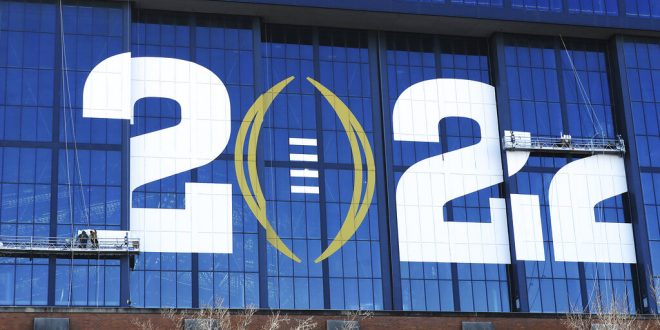 Workers put the final touches on Lucas Oil Stadium ahead of the NCAA college football national championship game between Alabama and Georgia on Friday, Jan. 7, 2022, in Indianapolis. (Curtis Compton/Atlanta Journal-Constitution via AP)

December’s SEC Championship was not enough to decide it. Despite Alabama rolling over Georgia 41-24, the two teams meet again Monday night in the National Championship.

Deservingly so, as the teams have shown they are clearly the two best in the nation. Significantly, Georgia trounced the Big 10 champion, Michigan, in the Orange Bowl 34-11. With that, the Bulldogs advanced to their second National Championship game under coach Kirby Smart. In 2018, Smart fell to his mentor, Nick Saban and Alabama, 26-23 in an overtime classic.

Certainly, the Crimson Tide reaffirmed their crown as defending champions. In the Cotton Bowl, Alabama rolled over Cincinnati 27-6, spoiling the Group of Five’s CFP debut. Markedly, Saban is coaching for title No. 7 in Tuscaloosa (No. 8 for him) following 2020’s victory.

Arguably, these are two of the most talented teams in the country. Altogether, the Bulldogs boast the No. 2 overall defense in the country, allowing an astonishing 4.06 yards per play. Conversely, the Tide rank No. 6 in total offense, led by Heisman-winning QB Bryce Young.

So, the question begs: which breaks first? Albeit, Saban the perfectionist sees a flaw with his elite unit. Undoubtedly, Alabama’s offensive line has been an Achilles heel at times on an otherwise remarkable unit. Notably, the unit has a 6.2% sack rate, which ranks No. 62 in the nation. Contrarily, the ‘Dawgs sack the quarterback 9.25% of the time, which ranks No. 11 in the nation. Saban knows in order to win, his line must keep a clean pocket for his sophomore QB.

On the other hand, perhaps the best player in this game may be Alabama edge rusher Will Anderson Jr. On the season, the sophomore has 17.5 sacks along with a mind-boggling 31.0 tackles for loss (TFL). In the SEC Championship, he logged one of the Tide’s three sacks along with two TFL’s. In December, pressure led by Anderson forced Bennett IV to throw two interceptions with a 77.0 QBR. Georgia needs to keep the pocket clean for its QB, who knows the magnitude of this game.

But, the ‘Dawgs offensive line should give fans hope after the semi-final match-up with Michigan. On the day, the unit allowed zero sacks and two tackles for loss to a defensive line that included Heisman finalist Aidan Hutchinson. Chiefly, tackle Jamaree Salyer anchored the unit, quieting the potential No. 1 overall pick in the 2022 NFL Draft all night long.

Yet, when push comes to shove Alabama has the better quarterback, which certainly means something. Young has been nothing short of phenomenal in 2021,  throwing for 4,506 yards and 46 touchdowns. Indeed, he is next up in a pedigree that breeds NFL quarterbacks. So, the signal-caller explains how watching Mac Jones in 2020 helped him lead the Tide back to college football’s biggest stage.

Georgia will be without starting defensive back Tykee Smith, while the Tide will be missing WR John Metchie and DB Josh Jobe.

Overall, Georgia matches up well with Alabama. However, it’s tough to remove December’s route from memory. Even further, it’s difficult to pick against the greatest coach of all time, especially against his former disciple. In total, only one former assistant has beaten Saban before, which was Jimbo Fisher at Texas A&M this season.

While betting with the public isn’t always wise (60% of spread bets are on Alabama +2.5 according to CBS Sports), it’s difficult to not go with Saban here. If Will Anderson and the defensive line can get pressure on Bennett IV

Sam Petosa is a Journalism major pursuing a Specialization in Sports and Media at UF. The South Florida native produces daily shows for WRUF, including "Sport Scene with Steve Russell, and "The Tailgate." In addition, Sam provides weekly sports updates for WUFT News and radio Sportscenter's for WRUF radio. Sam has been a writer at ESPN Gainesville since January 2020.
@sampetosa5
Previous Pat Dooley’s ‘Back 9’ Jan 10th
Next Dan Mullen Talks College Football Title Game