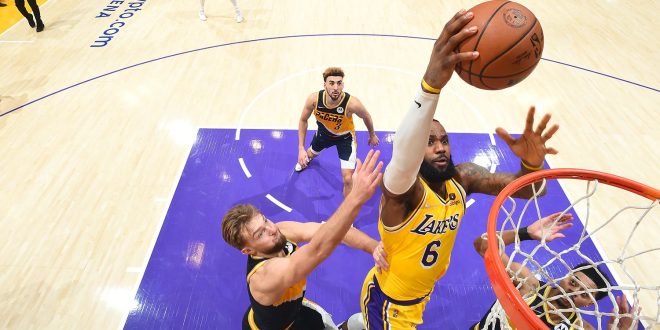 LeBron James goes up to the bakset in the Lakers 111-104 loss to the Pacers on Wednesday night.

In a season that started out with clear championship hopes, the Los Angeles Lakers find themselves at a mere 22-23 record. The team has struggled to find a consistent rhythm, and currently sits eighth in the western conference.

Trailing to the Indiana Pacers with four minutes left on Wednesday, head coach Frank Vogel made the decision to bench Russell Westbrook with support from the head office. Westbrook has played more critical minutes this season than any other Laker.

Vogel remained confident in his decision stating that he was, “Playing the guys that I thought were going to win the game,”.

The Lakers would not complete the comeback and lose 111-104.

In Vogel’s defense, Westbrook has been far from good for the Lakers as of recent. He has failed to shoot over 50%  in any game this month. In Wednesday’s loss to the Pacers, Westbrook put up a poor 5-17 on FG. Regardless, the blame shouldn’t all fall on Russ. Los Angeles ranks No. 19 in defensive efficiency and can’t close out games with a strong showing. Additionally, poor squad building and injuries have plagued the purple and gold this season.

So what is the solution?

ESPN’s Adrian Wojnarowski had this to say current situation in LA:

Lakers Turning it Around

With 37 games left and one of the most difficult schedules in the NBA, the road ahead is difficult, but giving them some time may not be a horrible idea. If Los Angeles can pick up some key wins in the next month, then momentum is likely to build headed into the spring. LA has a extensive veteran leadership, and one could see them turning things around in the locker room.

The Lakers head to the east coast for a six game spell beginning against the Orlando Magic tonight at 7 p.m. EST.