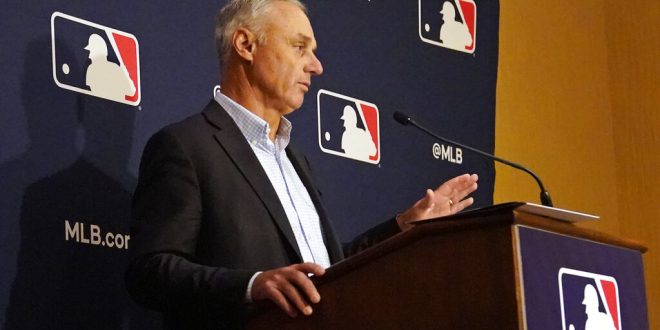 The MLBPA is “unimpressed” by Saturday’s meeting with MLB executives on collective bargaining talks.

Both sides met for sit down No. 5 in the midst of a pending lockout. With conversations at a stalwart, the main goal is to move the process forward towards a labor deal. Conversely, it looks as if the opposite took place.

During the meeting, the MLBPA saw a comprehensive list of new economic changes, in four main groups.

The MLB’s proposed plan offers the MLBPA two systems for a minimum salary.

Foremost, players would receive a single minimum salary of $630,000 starting in 2022. This salary has no cap and discretionary raises are possible.

The MLBPA is looking for a $775,000 minimum, no matter the Major League Service Level.

A topic that is agreed upon, the MLB raised their offer to $15 million for the MLBA’s Pre-attribution bonus pool. Unable to agree upon financials, the MLBPA is looking for a $100 million poll.

The MLB added draft pick incentives to limit the number of teams who limit the play of top players. With these incentives, teams can possibly add two draft picks pending on the results of the player. The MLBPA agreed on the idea, but also proposed service time bonusses based off award voting results.

The plan in which the MLB constructed is clear and concise, but it simply doesn’t meet the needs of the MLBPA. As the lockout continues, players have begun to voice their frustrations.

We don’t need mediation because what we are offering to MLB is fair for both sides:

In a perfect world, Spring Training would start tomorrow with pitchers and catchers reporting. But, it’s 2022, and the status of Major League Baseball is far from perfect.

If these trends continue on, all signs point to a delayed start of the season. The future is blurry, but one thing is for sure: the players want change and they want it now.