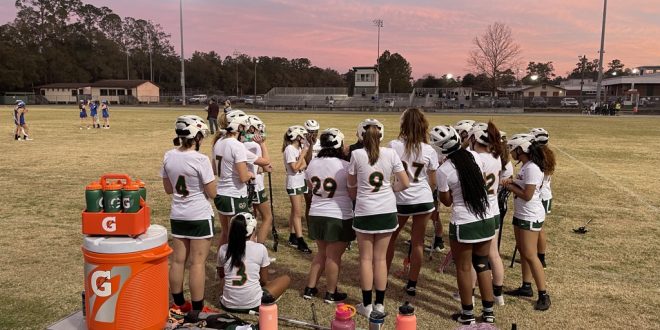 By Hugh Green and Cherie Chick

The Eastside Girls Lacrosse team played their first game of the season on Tuesday night. They matched up against the Panthers from Newberry High School. The Rams were coming off a very disappointing season in 2021, in which they finished the year just 1-11. Eastside’s sole victory did come against these Panthers, however, so their confidence coming into this one was sky-high. The Rams put on a show Tuesday night, coming away with an astounding 14-1 victory over Newberry.

The Rams got off to a flying start against the Panthers. Within the first five minutes of the game, they had scored five goals and were up 5-0. They continued applying pressure as one of their veteran leaders, Ammy Agarwal, scored her third goal of the game. This secured her a hat trick just 11 minutes into the game and bumped the lead up to seven.

Newberry’s defense had no answer for the constant pressure being applied by the Rams. Eastside seemed to have possession of the ball the entire first half. They were making great cuts towards the goal and didn’t stop moving. This movement caused lots of issues for the Panthers’ defense all night long.

Eastside didn’t stop after Agarwal scored her third goal in the first half. After Newberry was finally able to get past the Rams’ goaltender to score their first goal of the game, Eastside continued to attack on offense. They scored another five unanswered goals to close out the half. Two of these coming way of Agarwal, as she finished the first half with an incredible five goals to her name. When the horn sounded to end the first half, the Lady Rams led by a score of 12-1.

Rams #3 Ammy Agarwal scores the last goal of the first half. Agarwal has 5 goals in the game so far. Eastside leads 12-1 against Newberry at halftime. @Eastsidehsrams @ESPNGainesville @RowdyEHSRams @ThePrepZone @GNVpreps pic.twitter.com/q6dvm3AwIH

At halftime, Eastside’s Head Coach Emorie Keimig spoke to her team about how they needed to continue to put pressure on the Panthers. However, she wanted them to run their plays and make more precise passes. She didn’t want to lose possession as they had a few times in the first. Coach Keimig urged her girls to run their offense like they had practiced so they would be able to cruise to victory.

Maintaining Control Until the End

The Rams continued to play strong in the second half and tried to formulate plays from the beginning. Rams junior Linda Mentz fought hard for every loose ball and ran quickly across the field to lead attacks. Persistent movement remained the strength of the Rams, and Senior Abby Ferrell capitalized on space developed by the strategic plays. 7:05 into the second half, Ferrell scored the 13th goal for the Rams. Three minutes later, she scored the 14th and final goal of the game. Ferrell finished the game with 4 total goals.

The Panthers did not stand a chance against the Rams. Every time they gained possession of the ball, the Rams were quick to react and regained possession in no time. Towards the end of the game, the Rams slowed their pace and focused on maintaining control rather than scoring goals. The game ended with a final score of 14-1.

Coming off of a devastating season last year, the Rams were extremely thrilled to start this season with a solid win. The team cheered and celebrated with tremendous joy the moment the final whistle blew. A total of six Eastside players managed to score at least 1 goal. The Rams’ energy and most definitely, their confidence, was significantly boosted in preparation for the rest of the season.

After the game, Eastside’s Head Coach Emorie Keimig gave some insight to the Rams’ strong start of the season and their star player of the game – Senior Ammy Agarwal.

What’s Next for Eastside?

Hugh is a second year student majoring in Journalism: Sports and Media at the University of Florida.
@HGreen_15
Previous Providence Girl’s Soccer Takes Down P.K. Yonge to Advance to State Semifinal
Next Mavericks Snap the Heat’s Streak and Win 107-99