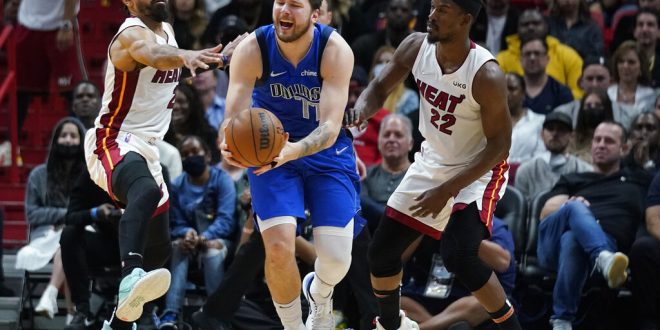 Dallas Mavericks guard Luka Doncic (77) passes the ball as he is blocked by Miami Heat guard Gabe Vincent, left, and forward Jimmy Butler (22) during the second half of an NBA basketball game, Tuesday, Feb. 15, 2022, in Miami. (AP Photo/Wilfredo Lee)

The Miami Heat lost 107-99 to the Dallas Mavericks. They played a solid first half and built a 13-point lead into halftime up 59-51.

In the second half, the Mavericks changed the game.

Dallas took control with a late third quarter and never looked back.

Miami made just one three-pointer the entire second half. Even when a Maverick missed a shot, Dallas offensive rebounds were a killer for the Heat.

Miami’s best chance to tie the game came with just inside three minutes left, only down by five points.

The Mavericks were up 101-96 when Dallas had just successfully challenged a foul call that would put Heat’s Bam Adebayo at the line.

Jimmy Butler missed a three-pointer which left the Heat down six with just inside two minutes left.

It was at this time, just under two minutes, that Butler drove to the basket. But shot missed. Jalen Brunson knocked down a three on the other end, and Dallas went up 104-95 with 1:49 left.

There were key players on both sides of the ball.

Brunson and Maxi Kleber each finished with 19 points, and Dorian Finney Smith had 14 points for the Mavericks, who snapped Miami’s five-game winning streak.

Recently acquired Davis Bertans had 12 points for Dallas in his debut. Spencer Dinwiddie acquired from Washington for Kristaps Porzingis on Feb. 12, finished with four points.

Despite Tuesday’s defeat, the Miami Heat remain at the top of the Western Conference with a powerful 37-21 record. They will rest for a day, and then take a trip to Charlotte to face the Hornets Thursday.

Up next, the Dallas Mavericks rest for a day before visiting New Orleans to play the Pelicans on Thursday.