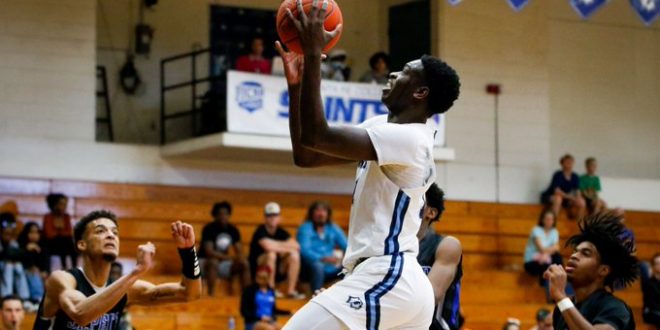 Saints Men’s Hoops are off to States

The No. 5 seeded Santa Fe Saints are ready to faceoff against the No. 4 seeded Florida Southwestern State College Buccaneers to start the postseason.

The program gained its eighth conference title in 2012 when it defeated Polk State College on Feb 22. In doing so, they automatically qualified for the postseason FCSAA/Region VIII State Tournament.

The match-up will be the second time these two teams will face off against each other this season. The Saints hosted a neck-to-neck battle against the Buccaneers in an 83-81 win on Nov 6, 2021.

The Santa Fe Men’s basketball team has had a season to remember with a 24-5 overall and 12-3 conference record. They are currently on a six-game winning streak and are looking for another win against Southwestern State College.

On the court, the Saints have worked well as a team but they do have a few stand-out players. Two Freshmen guards, Bradley Douglas and Hasan Abdul-Hakim, have had a spectacular 2021-2022 season with the saints. Douglas has 15.3 points and 4.1 rebounds per game while Abdul-Hakim had 13.2 points and 5.7 rebounds per game.

The team has found success under Head Coach Chris Mowery, who has been with Santa Fe since 2003. He holds the record for the most wins in the school’s programs (333-201), won four MFC titles and two MFC tournament titles. He spoke highly of this season’s success and how the team performed.

And what a year it has been for the Head Coach of the Saints. Congratulations to Coach Chris Mowry in his 19th season at @SantaFeCollege, the 2021-2022 Central Conference Coach of the Year! #SicEmSaints pic.twitter.com/epm7PWhl49

Florida Southwestern State had a big 115-74 win over Pasco-Hernando State College in preparation for the quarterfinals. They started strong and carried it through the entire game.

After gaining a 17-point lead by halftime, Freshman guard Rhyjon Blackwell put on a stellar performance in the second half. He scored five three-pointers in three and a half minutes, giving the Bucs an 85-52 lead. Another player to keep an eye on for is freshman forward Bryant Selebangue. He has 13.2 points and 10.5 rebounds per game this season and has a consistent performance in the past few games.

The team currently holds a four-game winning streak after their Feb. 24 win. Intending to keep up the momentum, the Southern Conference runner-ups are looking to defeat Santa Fe to move forward in the tournament.

The Saints will travel to Niceville, FL to face off against the Buccaneers on March 2 at 9 pm. The winner will advance to the semifinals on March 4 at 4 pm to play against either No. 1 Indian River or No. 8 Tallahassee.

@_vanessa_sanch
Previous Hawthorne vs. Bradford Set to Tip-Off in Lakeland
Next Tennessee vs. Georgia preview