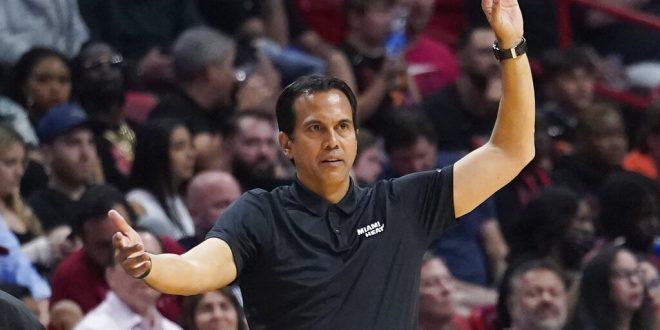 The Miami Heat were not looking too hot heading into the NBA Playoffs. The Heat took down the Sacramento Kings on Monday night with a final score of 123-100.

Before the Heat suffered a loss to the Philadelphia 76ers last week, they were heavily favored to finish No. 1 in the Eastern Conference. The Miami Heat, Philadelphia 76ers, and Milwaukee Bucks all have 28 losses. Miami reclaimed first place in the East after the Toronto Raptors beat the Boston Celtics on Monday night.

Head coach Erik Spoelstra used his team a little differently this game. Max Strus played over Duncan Robinson as a starter. Butler substituted midway through the first and third quarters. This allowed Butler to be rested going into the second and fourth quarters.

Tyler Herro was back doing what he does best: scoring from 3, around the rim, and mid-range. Robinson posted five three-pointers.

Tyler sent the defender flying and got one of the easiest buckets of his life pic.twitter.com/6X7JRp79Qe

In the first 26 minutes of action, Kyle Lowry made three three-pointers and dished out six assists.

Bam Adebayo also stood out among the roster with 22 points, 15 rebounds, two steals, and a block. Adebayo went 10-of-16 shooting from the field.

The Heat will travel to Boston to face the Celtics for a 7:30 p.m. game on Wednesday evening. This game could have big implications for the top seeds in the playoffs. The Celtics are just one game behind the Heat with a 47-29 record. A win for Boston would see them pull level with the Heat with just five games left in the season.