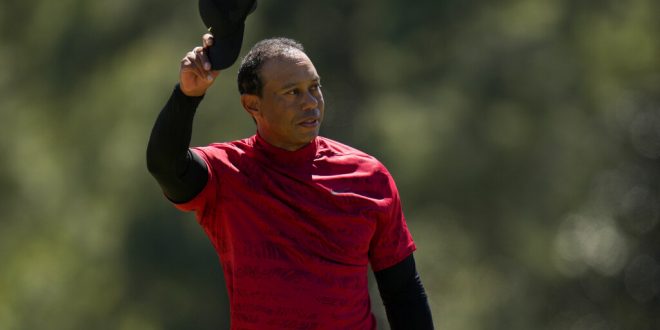 Tiger Woods tips his cap on the 18th green during the final round at the Masters golf tournament on Sunday, April 10, 2022, in Augusta, Ga. (AP Photo/Jae C. Hong)

Tiger Woods has committed to play in the Open Championship at St. Andrews.

Woods fell in love with golf from a young age, at just the age of nine he told his dad that he was going to be professionally excellent. No matter the challenges faced Woods kept going and made a name for himself in golf that will go down in history.

One of the obstacles that had many questioning Woods return was a car accident that occurred on Feb. 23, 2021. Woods was severely injured during the accident. He had to get surgery on his lower right leg and ankle. While this was a bump in the road for Woods he stayed motivated, went to physical therapy, and made a comeback. His first return was at the PNC Championship in December with his son where they finished second. Woods continues to practice and get better, even though he didn’t win the Masters this year as he hoped, he is proud of how far he has gotten and is committed to playing in the Open Championship at St. Andrews.

I didn’t play my best out there, but just to have the support and appreciation from all the fans, I don’t think words can describe that. Congratulations to Scottie Scheffler on an outstanding win. It’s been a special run. pic.twitter.com/8BAMJKlGFY

The Open Championship is set to commence on Thursday, July 14. Woods stated he will be attending. Even though he won’t be playing a full schedule ever again he will play big events. Playing in the Masters was big for him and he didn’t know if he would be there so he is proud of how far he has come.

As he prepares for his next tournament his goal is to build his stamina and continue to recover his leg.

Woods has won the Open Championship three times during his career with two of those being in St. Andrews. Stating that he loves it there and “it’s the home of golf.” While he doesn’t know what other events he will be attending he will be there for that one.