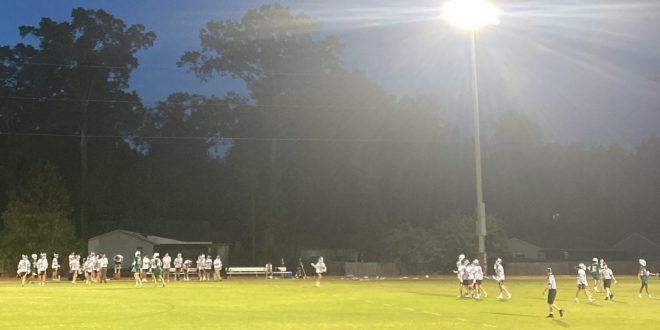 After an astounding regular season, the Oak Hall boys lacrosse team (10-5) began its quest for a district title Tuesday evening. Led by three college signees, Oak Hall thinks it will have a great shot this year.

The team in its way was the Lincoln Trojans (4-14) out of Tallahassee. Despite being the number one seed in the district, Oak Hall was coming off a three game losing streak. This game would prove pivotal to turning its momentum around. The winner of this match would move on to face either Maclay or Trinity Catholic in the District Final.

I’m back at @OakHallSchool where the boys lacrosse team is taking on Lincoln in the district semi final. Follow this thread for updates @ESPNGainesville @OakHallLacrosse pic.twitter.com/lnaH8Qj9bz

Both teams got off to quite the start after the opening face-off.  Oak Hall quickly had a goal, but Lincoln rebounded just as fast.

After the next face-off, Lincoln took it the length of the field and evened the score at 1-1. Shortly after, the Trojans were able to take a slight 2-1 lead. Immediately after, it was time to buckle down for Coach Jonathan Montes’ players. They began to dominate possession with ease and the goals began to fly in. Senior Pierce Montes was a standout all night long for the Eagles.  They took a 7-3 lead into the second quarter.

The second quarter was textbook from Oak Hall. It showcased its depth at all positions by every player contributing on the field. It began to play as the number one seed and reaped the benefits. The Eagles scored six goals and only allowed one in the second quarter. They took a commanding 13-4 lead into the break.

Halftime. Eagles have an excellent second quarter scoring 6 and only allowing one. Pierce Montes one of the standouts so far for Oak Hall. Eagles lead 13-4 over Lincoln @RAWE_RECRUITS @ThePrepZone @GNVpreps pic.twitter.com/Z43q0UbkVC

After practically putting the game to bed in the first half, it was time for Oak Hall boys lacrosse to see the game out.

Once the running clock started it was cruise control from there on out. It was patient in building play up from the back and positive in the attacking third of the field. After making some great saves, the Eagles saw out the rest of the game in remarkable fashion. They would end up winning 19-5.

Oak Hall will host the district final as the number one seed. If it can close out with a win, it will receive an automatic bid to regionals as part of the state tournament. The Eagles will play Thursday for a shot at the district title.