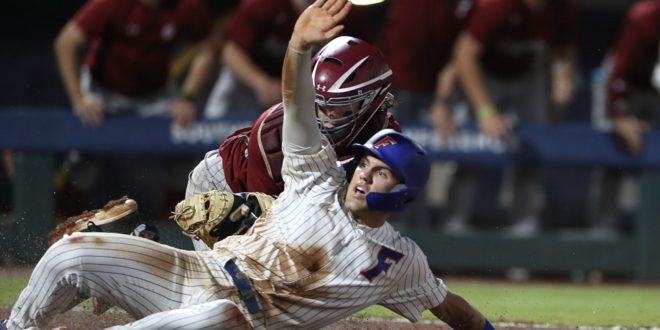 Gators baseball had a slow start on their first day at the SEC tournament as their game against the South Carolina Gamecocks was delayed for five hours and 45 minutes due to rain.

Despite the slow start, the Gators were ready to take on the Gamecocks.

Josh Rivera put up the first run of the game in the bottom of the fourth inning thanks to Jac Caglianone getting a base hit where he ended up reaching first base. Rivera was already on second base and was able to score on a throwing error.

Due to Brandon Sproat’s efforts, the Gamecocks were scoreless until the top of the ninth inning, when Braylen Wimmer made it home. This resulted in the Gamecocks being able to tie up the score.

The game ended 2-1 with a stellar play in the tenth inning by Colby Halter and Ty Evans. Halter went up to the plate and hit a walk-off sac-fly where Evans could run to home plate and secure a win for the Gators.

This play was a close call where the umpire stated that Evans was safe. This memorable play resulted in the Gators advancing to day two of the SEC tournament.

Sproat had a fantastic game that became a career-high milestone in his college career. He threw a shutout through 8.1 innings including six no-hitter innings. Sproat is the first Gator pitcher this season to go through eight complete innings. Sproat has progressed a lot through his baseball abilities since his first year. During his sophomore year, he has continuously proven to be a significant player on the Gators’ roster.

Gators advance towards the second round

The seventh seed Gators will be going up against the second seed Texas A&M in the third game of Wednesday. The winner of this game advances to the third round of the SEC tournament.

Cristina Santiago is a senior at the University of Florida studying journalism with a concentration in sports and media.
@https://twitter.com/CristinaEspinet
Previous Mavericks stay alive against Warriors in Game 4
Next Rangers Even Up Series with Hurricanes, Oilers Take 3-1 Lead Over Flames