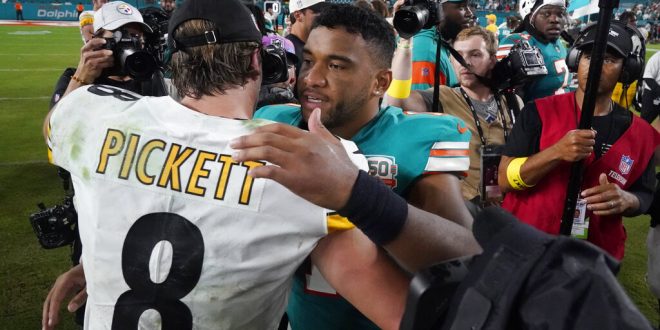 The win meant more than a return to the ways of the Dolphins team that began the season 3-0.

The celebrations go above that of having Tua back under center.

The former 2020 fifth-overall pick completed 21 of his 35 passes for 261 yards en route to his fourth win of the season.

Tagovailoa came out of the gate with an imposing intent to be more than the concussion that had sidelined him on September 29th.

Six completions, including three that went for at least 17 yards, and the Dolphins opened the game with a score behind Tua’s arm.

First game back. Confidence in his stride. Power behind his throws. The narrative was unfolding and Tua’s Dolphins were starring. But the rest of the game fell short of the hero’s homecoming.

Miami would clock out on the offensive side of the ball after back-to-back drives ending in field goals.

Perhaps it was the rust.

Perhaps it was the reality of playing without the rush of the opening drive.

Dolphin fans will undoubtedly be happy to have their star back in hopes of more wins to come.

The other side of the quarterback coin offered no luck and a worse fate for the Steelers.

Though Kenny Pickett completed 32 of 44 for 257 yards and a touchdown, Pittsburgh’s offense seemed to move backward and with the Dolphins current all at once.

Pickett began his day in Miami getting picked off by Justin Bethel.

His slow start would see a transformation from the Steelers’ black and gold to flashes of the Pitt quarterback that earned the No. 20 overall pick in 2022.

Rule changer, the future, Big Ben’s replacement. That guy would come into the game and rival Tua.

Down 13-3, the second throw of the drive would see Pickett connect with George Pickens for 30 yards, cross the T’s.

Third and 12 with the endzone in sight, Pickett with a scramble up the gut for 16-yards, dot the I’s.

Another pass to Pickens, seven yards and for a touchdown. Signature Kenny Pickett.

That was the man the Steelers drafted.

Five punts and a turnover on downs later and the Dolphins were victorious.

Five punts and two interceptions for the Steelers meant more work to be done.

The defense’s best day meant an early end to the Tua-Pickett show as both teams posted zeroes in the second half.

The Dolphins made a determined Pickett pay with interceptions on each of his last two drives.

Miami would seal the game on the second of the two interceptions with a toe-tapper from Noah Igbinoghene in the endzone.

Ultimately for the Dolphins and Steelers…

The game gave both teams hope for their future under center. For Tua and the Dolphins, a return to winning ways means able hands in the fight for a playoff spot. Tua is back and at least on the win column, so are the Dolphins. For Pittsburgh, Kenny Football still needs time. He has shown flashes of the dual threat that can one day lead the black and gold. Both teams have the entire second half as a testament to their need to improve and bid on a season of unlikely divisional leaders.

Next for the Dolphins, a trip to Detroit to face the  Lions (1-5) will offer Tua favorable conditions for his second game back. All eyes will be on Tua’s health and the Dolphins’ offense depending on it.