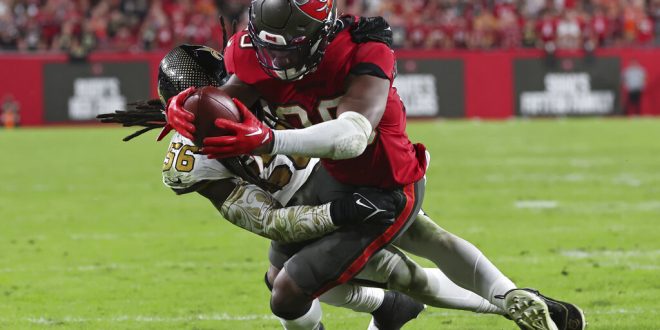 The Buccaneers beat the Saints on Monday night after multiple drives led by Tom Brady, two scores down to win 17-16. The Buccaneers are now, for the first time since Week 6, a .500-win team. With the NFC south team quality as bad as it is right now, the Bucs still have and control their destiny for the playoffs.

Coming into the season, there were many questions about the team. How could Tom Brady retiring and then coming out of retirement could lead this team back to a Superbowl without his security blanket in Gronk? And how would the sudden departure of Head Coach Bruce Arians affect the culture and team dynamic with new Head Coach Todd Bowles?

Tampa Bay started strong, going up 2-0 to start the season. The team then hit rough waters, going on multiple losing streaks only interrupted by a win against the Atlanta Falcons. The Bucs now have multiple games where they have needed game-winning drives to be orchestrated by Tom Brady and the offense. It seems that they can turn it on when needed. So the question now stands: can they keep this momentum going into December and January to make a playoff push?

While the start of the season has not gone as expected for Tampa, the remaining schedule for the Bucs is going to test and challenge the team. The two biggest challenges come in their next two games. The first being against the San Fransisco 49ers. The Niners are now on their third-string quarterback in Brock Purdy, as both Trey Lance and Jimmy Garoppolo have suffered injuries that have sidelined them for the remaining season. However, their team still has a multitude of superstars and playmakers. Tampa will need to take advantage of the young quarterback and capitalize off mistakes if it want a chance at beating the Niners.

The Bucs then face off against the Cincinnati Bengals the week after. The Superbowl runner-ups, like the Bucs, started off slow and in a slump but now, heading into the later part of the season, the Bengals seem to be back to their high-powered offensive ways. Of the two matchups, this one will test the Bucs the most, going against an already playoff-tested roster that has the potential to put up points while not allowing its opponents the chance to do the same.