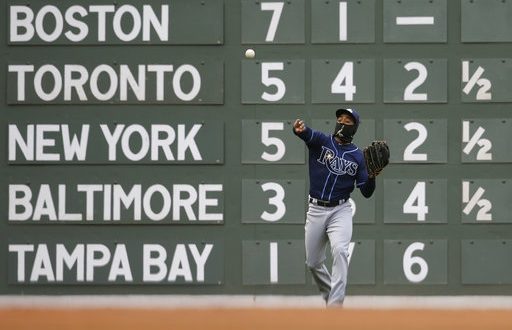 The Tampa Bay Rays’ downhill slide continues with another loss at the hands of the Boston Red Sox.

After earning a 6-4 opening day victory over the Red Sox, the Tampa Bay has dropped eight consecutive games. Tampa Bay fell to the Red Sox 8-7 on Sunday after leading for most of the game. With the loss, the Rays dropped to 1-8 on the season for one of their worst starts in franchise history.

It’s not fun times on the Rays side of things.

At the end of a three-game series, the Rays looked poised to end their opening skid and avoid the sweep. With starting pitcher Andrew Kittredge on the mound, the Red Sox opened their scoring in the bottom of the first inning. Right fielder Mookie Betts scored from third base after designated hitter Hanley Ramirez grounded to short in his first at-bat.

That was all for the Red Sox, though, as Kittredge escaped the inning allowing just the earned run.

The Rays tied things up in the top of the second, as first baseman C.J. Cron put Tampa Bay on the board. Cron launched a 443-foot home run to center off of starting pitcher Eduardo Rodriguez for his first homer of the season.

Tampa Bay headed into the top of the third with the game tied. They managed to score runs in five consecutive innings, including two in the seventh. Through eight innings, eight Rays batters notched at least a hit and built a comfortable 7-2 lead. Rays pitchers Ryan Yarbrough and Jose Alvarado held the Red Sox to two hits and one run before reliever Matt Andriese entered the game.

Andriese, who came into Sunday’s game with a 3.86 earned run average, opened the bottom of the eighth with a five-run lead to work with. To get things started, first baseman Mitch Moreland drove in Ramirez for a RBI double to close the gap to 7-3. Third baseman Rafael Devers drove in two more runs, as Moreland and second baseman Eduardo Nunez scored to make it 7-5. Closer Alex Colome came in relief of Andriese, who allowed four runs and four hits in 0.2 innings pitched.

We’ve got ourselves a 2-run game! @Rafael_Devers drives in 2 on a double down the LF line.

With an opportunity to stop the bleeding, Colome allowed three runs, including the game-tying run to catcher Christian Vasquez, who advanced from second base after Betts singled to left.

Left fielder Andrew Benintendi put the Red Sox over the top with a double to left center, driving in Betts to give Boston an 8-7 lead. That would complete the sweep and send the Rays to their eighth straight loss.

While the temperature was frigid at first pitch Sunday, that wasn’t the only thing that was cold. The Rays hitting and pitching haven’t been able to get it done thus far. Tampa Bay pitchers have a combined one win (courtesy of Austin Pruitt on opening day) and a near-American League high 5.33 ERA through nine games. Pitchers Jake Faria (14.29), Colome (15.43) and Andriese (10.13) have notable high ERAs early on in the season.

The Rays’ hitting isn’t off to a great start either. Through nine games, Tampa Bay hitters have a combined .201 batting average (second worst in MLB). They are also in the bottom five in on-base (.272) and slugging (.295) percentage. Second baseman Joey Wendle, who the Rays acquired in the offseason, is currently tied with catcher Jesus Sucre and third baseman Daniel Robertson for the team lead in batting (.333).

On the other side, the Red Sox haven’t started a season this well ever. Boston is off to its best nine-game start in franchise history with an 8-1 record.

The Red Sox are in the Top 10 in runs scored (42) and team batting average (.252) through nine games. Former Gators baseball pitcher Brian Johnson has contributed to the success and earned one of Boston’s wins against the Miami Marlins this season.

Red Sox manager Alex Cora talked about how much fun the team is having right now.