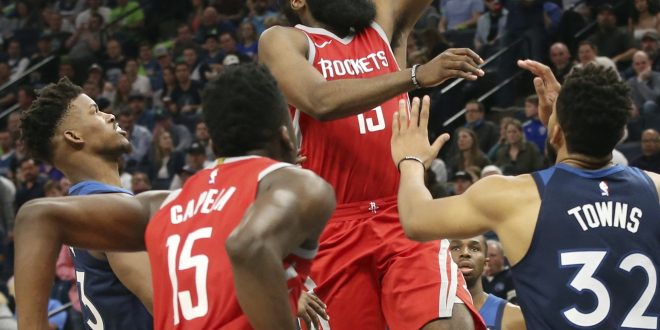 The Houston Rockets and Minnesota Timberwolves tipped off Monday night and for two quarters it was a tightly contested ball game. Then the third quarter happened. The Rockets exploded for 50 points and never looked back, cruising to a 119-100 victory.

The huge 50-point 3rd quarter ends up just one point shy of tieing the playoff record for points in a quarter by one team, and according to Rockets head coach Mike Dantoni, it’s about time.

Minnesota started the game off well. They troubled Rockets star guard James Harden throughout the first half and went into halftime only down a point, 50-49. In the first quarter, it looked like Minnesota would make a game out it. Derrick Rose provided some much-needed help off the bench and the Timberwolves were using their size to hang with the high-flying Rockets.

The second quarter was more of the same and the Timberwolves had the edge. Houstons shots weren’t falling and Minnesota was running down for layups. At the half, the Rockets were shooting just 38% while the Wolves shot 47%.

Then the third quarter started, and the Rockets woke up. And leading the way was James Harden and Chris Paul. The two combined for 37 points in the quarter and Harden had 22 alone. Those 22 points were the most ever by a Rockets player in a single quarter in playoff history. Which would have been enough to beat the Timberwolves alone in the 3rd quarter.

After just 6:37 the Rockets had outscored Minnesota 24-5. Their shooting was back and James Harden and Chris Paul could not be stopped. Houston outscored the Timberwolves 50-20 in the quarter which matches their total from the first two quarters combined! They took the 100-69 lead and coasted on it for the rest of the game.

The Rockets turned it on in the third by getting out in transition, running and hitting their shots. They completely blitzed Minnesota and Timberwolves guard Derrick Rose said after the game the tempo was increased and that’s where they lost the game.

Rockets all but locked up the series

Following the two-game stretch in Minnesota, the series now heads back to Houston for game 5 with the Rockets up 3-1. That’s nearly an insurmountable hole to climb out of, especially against the top team in the conference in the 1-seed Houston Rockets.

It’s not impossible but it’s improbable. The Houston Rockets have so much firepower and the chance to end the series on their home court and get some rest before the next series is an opportunity the Rockets don’t want to pass up.

The Timberwolves do have a chance though, it’s slim but it’s a chance. As small forward Jimmy Butler points out, they just have to take it one step at a time and focus on the next play.

And don’t think that Minnesota’s confidence is shaken either. It’s a tough road to come back from a 3-1 deficit, but the Timberwolves say they are still confident and up for the challenge.