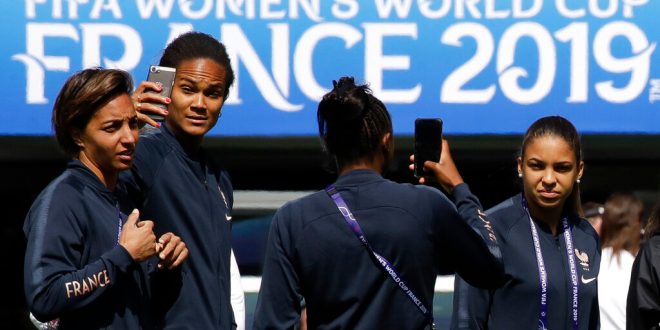 Parc des Princes and the streets of Paris will flare up for the 2019 FIFA Women’s World Cup in France that kicks-off this Friday. Hosts, France, will face South Korea in the first game of the 8th edition of this tournament.

Fourth-ranked France comes into this opening World Cup game winning 10 of its last 11 matches including a win over the current title holders, USA.

Les Bleues is led by Head Coach Corinne Diacre, a former French Captain. Diacre helped France qualify to its first World Cup in 2003 by scoring a goal despite playing center back. Later in her career, Diacre became the first women to coach a men’s French club, Clermont Foot. In 2017, Diacre was named Head Coach and now leads one of the powerhouses in the world of women’s football.

Captain, Amandine Henry is the French leader in this competition. Furthermore, Henry is known for her ability to read the game, create plays, attack and defend. You might remember her goal four years ago in Canada’s World Cup when she scored a screamer against Mexico. With that being said, Henry will look to lead France to its first World Cup victory.

France’s roster is deep including young and highly capped players. For example, Valerie Gauvin, 23, will be leading the attack alongside vice-captain, Eugenie Le Sommer, 30. Gauvin has tallied an impressive 10 goals in just 18 games, while Le Sommer has 74 goals in her 159 caps. Equally as important, Wendie Renard, 28, will hold it down in defense bullying the opposition in the back.

South Korea met France in the round of 16 of the 2015 Women’s World Cup in Canada. The result was 3-0 in favor of France.

Coach Yoon Deok-yeo will rely on captain Cho So-hyun’s clutch factor as he did back in 2015 and in the Women’s Asian Cup. In detail, So-hyun helped Korea reach the 2015 World Cup round of 16 by scoring a vital goal against Spain.

To that effect, So-hyun was named Korea Football Association Player of the Year. Thirty-year-old So-hyun did it again just a few months ago when she scored two goals against the Philippines to secure South Korea a spot in France 2019.

France vs. South Korea starts on Friday at 3 p.m. ET on FS1.

Figuring out a plan to make it big in the soccer scene in the U.S. or anywhere else in the world. For now, I'm having a blast writing for ESPN Gainesville and learning a lot from managers and students around the workplace. I'm covering the TV beat for Gators Soccer. What a team! Follow me on twitter: @J_AguerrevereUF
@@J_AguerrevereUF
Previous NHL Stanley Cup Game 5: St Louis Takes 3-2 Series Lead Over Boston with Controversial Goal
Next NBA Finals Game 4 Tonight: Raptors Lead Series 2-1 Over Warriors