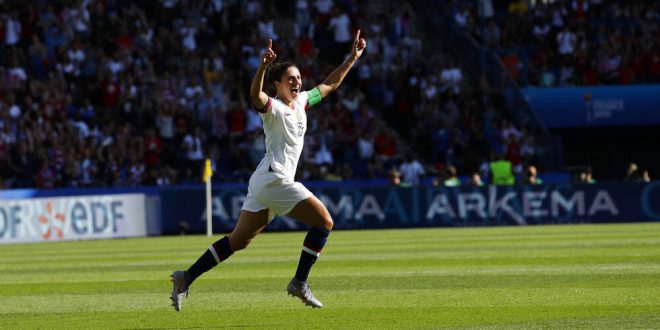 The World Records continued to roll in for the U.S. Women’s team on Sunday during their 3-0 victory against Chile. Carli Lloyd scored two of the three goals for the U.S. during her record-setting match. With this win against Chile, the U.S. secured their spot in the round of 16.

The U.S. scored all three of their goals during the first half under a heavily rotated lineup. The U.S. got to work quickly and Lloyd scored her first goal of the match in only the eleventh minute. This goal came from a left-footed shot after a poor clearance from Chile.

During the 22nd minute of the game, Chile gave the U.S. a scare after a missed save from USA goalkeeper Alyssa Naeher. However, Naeher and the USA were saved after the offsides flag went up.

Just four minutes after the almost score from Chile, the USA extended their lead to 2-0 after Julie Ertz scored her first goal in the FIFA Women’s World Cup. This corner was controversial, however, due to the ball not being called out of bounds under Mallory Pugh’s control. This would’ve secured a goal kick for Chile but it wasn’t reviewed by the VAR. This goal came from a header by Julie Ertz after a corner kick from Tierna Davidson.

Ten minutes before the half, Llyod would strike again for the third goal for the USA. Like the last, this goal also came from a header off a corner kick from Davidson. This made the game 3-0.

Unlike the USA’s previous game against Thailand, their scoring stopped after the second goal from Lloyd. Chile goalkeeper Christiane Endler had save after save to help keep her team in the running. The USA controlled 68% of possession, outshot Chile 26-1 and had 15 corners compared to Chile’s 1.

This was definitely a game to remember for Carli Llyod. Following her second goal of the match, she became the oldest player in World Cup history to score twice in a match. The first goal of the game also brought her another World Cup record for having the most consecutive games with a goal. This streak began in the round of 16 against Colombia at the 2015 Women’s World Cup.

Although the records are pretty cool, Lloyd really only had one goal in mind.

The USA will move on to face Sweden on Thursday, June 20th at 3 p.m. This match will be the first meeting between the U.S. and Sweden since Sweden ousted the USA on penalties in the quarterfinals at the 2016 Olympics in Rio de Janeiro.

Previous Matchday 2 for Group F: USA vs. Chile
Next FIFAWWC Group A Match-week 3: France vs. Nigeria &; Norway vs. South Korea