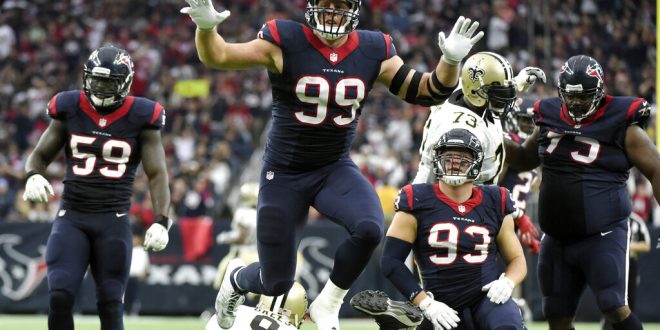 The NFL and Pro Football Hall of Fame introduced a new crop of legends Monday, as 52 players from the NFL’s past and present were named to the NFL 2010s All-Decade Team.

The 48 voters from the Pro Football Hall of Fame filled 23 offensive positions, 22 defensive positions and eight special teams spots. Eight players were chosen unanimously, while one player was selected to fill two positions.

Now, you can add unanimous selection to the 2010s All-Decade Team to that list of accomplishments.

In addition to his list of awards and achievements, Brady played 156 regular-season games for the New England Patriots in the 2010s and compiled an astounding 122-34 record. He threw for 43,727 yards and posted 316 touchdowns. That’s more passing yards 23 of the 28 Hall of Fame quarterbacks and more touchdowns than 25 of them. Brady’s numbers from just this decade exceed career numbers achieved by the likes of Joe Montana, Troy Aikman and Johnny Unitas.

Not just limited to regular-season success, Brady earned a 16-7 record in the postseason from 2010-2019. With 6,981 passing yards, 43 touchdowns and seven game-winning drives, Brady’s Pats were the decade’s team to beat.

Now, New England fans are left to wonder what’s next for their franchise after Brady departed Foxborough for Tampa Bay when he signed with the Buccaneers on March 20.

Running back Adrian Peterson, offensive guard Marshal Yanda, and offensive tackle Joe Thomas join Brady as the only unanimously selected players on the offensive side of the ball.

While not selected unanimously, LeSean McCoy joins Peterson in the All-Decade team’s backfield. He led all running backs in rushing yards from 2010-2019 with 10,434 yards. Frank Gore, the NFL’s third all-time leading rusher, and Super Bowl XLVIII champion Marshawn Lynch round out the running back position.

The BEST play from every offensive player named to the 2010s All-Decade Team! pic.twitter.com/HtUpPp2mrE

Larry Fitzgerald, Antonio Brown and Julio Jones fill the three of the wide receiver slots. All three rank among the top three in receptions and receiving yards from 2010-2019.

Calvin Johnson fills the last receiver void despite only playing through the 2015 season after retiring in 2016. The former Lions receiver led the NFL in receiving yards twice and receptions once from 2010-2015 and set the single-season receiving yards record with 1,964 in 2012.

14 catches.
329 yards.
One of the best WR performances of all-time.

Darren Sproles earned the nod as the first-ever flex position on an NFL All-Decade Team. The journeyman speedster ranks fifth all-time in all-purpose yards with 19,696, just ahead of Hall of Famer Tim Brown and one spot behind all-time leading rusher and former Florida Gator Emmitt Smith.

Sproles is also the only player to be named to two positions on the All-Decade team, as he also earned a spot as a punt returner.

Aaron Rodgers joins Brady under center, having earned a 96-45-1 record through 142 games. Rodgers amassed 38,145 passing yards and 305 touchdowns throughout the decade. Plus, he won a Super Bowl, a Super Bowl MVP, two league MVPs and was named First-Team All-Pro twice.

While the NFL’s all-time leading passer Drew Brees absolutely has a strong case to take Rodgers’ spot on the team, Rodgers’ inclusion is certainly understandable.

From long shot to Landlord. pic.twitter.com/icuE7cmVVG

Denver Broncos’ pass-rusher Von Miller led the NFL with 106 sacks from 2011-2019. He adds 490 total tackles to his resumé, along with a Super Bowl, a Super Bowl MVP and three First-Team All-Pro selections.

Meanwhile, Houston’s J.J. Watt tied Chandler Jones, who was also named to the All-Decade team, for second place among sack leaders. Watt’s 96 sacks and 479 total tackles do not tell the whole story. He led the league in tackles for loss three teams, sacks twice and approximate value three times. Additionally, he was named Defensive Player of the Year three times and earned five First-Team All-Pro distinctions.

.@JJWatt and @VonMiller and @RSherman_25 and…

Check out every defensive player named to the 2010s All-Decade Team! pic.twitter.com/jxaFHXAlJl

Defensive backs Richard Sherman and Earl Thomas patrolled the secondary in Seattle for a better part of the decade. The pair, known as part of the “Legion of Boom,” won a Super Bowl in 2013 and finished the decade ranked among the top three in interceptions.

Buccaneers’ defensive lineman Ndamukong Suh earned a reputation as a defensive menace in Detroit before heading to Miami, Los Angeles and then Tampa Bay. He has started 158 of 160 games in his 10-year career and has amassed 519 total tackles and 58.5 sacks.

Back with the Buccaneers in 2020…Ndamukong Suh! #GoBucs #SUHHHnami pic.twitter.com/4EG8wNNrZL

The NFL’s all-time most accurate kicker Justin Tucker is the only special teamer to earn unanimous honors.  The Ravens placekicker has accrued a field goal success rate of 90.75%. He converted on 265 of his 292 attempts and has led the league in field goals made twice since 2012.

Cordarelle Patterson makes the team as kick-returner with seven kick returns for touchdowns since 2013. That’s good for second all-time and only one behind the all-time leader, Josh Cribbs.

Super Bowl champion Tyreek Hill’s inclusion on the team may surprise some. He only entered the league in 2016, but he’s already returned four punt returns for touchdowns. Additionally, he has already accrued more than 1,000 yards on punt returns.

The two coaches named to the 2010s All-Decade Team were quite predictable.

Belichick’s Patriots went 125-35 and made the playoffs every year from 2010-2019. Additionally, the Pats made five trips to the Super Bowl and won three of them. His 125 wins, 10 playoff trips, 5 Super Bowl appearances and 3 championships led all coaches throughout the decade.

Meanwhile, Pete Carroll’s Seattle Seahawks went 100-59-1 and made the playoffs 8 times. Carroll and company made 2 Super Bowl appearances. In 2013, they cashed in and won Seahawks’ first Lombardi Trophy.

While the Packers did match the Seahawks’ number of playoff appearances and exceeded Seattle’s record, it took the Packers two coaches to do it.

Pete Carroll's 100 regular season wins and Super Bowl title from 2010 to '19 earned him a place on the 2010s All-Decade Team. @MikeSilver talks to the coach, who opens up about the highs (SB LVIII) and lows (SBLIX) of the past 10 yearshttps://t.co/cwmMdV7STD pic.twitter.com/VFzxuWUvDN

In 1969, the National Football League established the All-Decade team as an accolade that defined eras and shaped legacies with the introduction of the All-Decade Team.

Previous NBA 2K Player’s Tourney Quarter-Finals
Next April Showers: No NBA until May