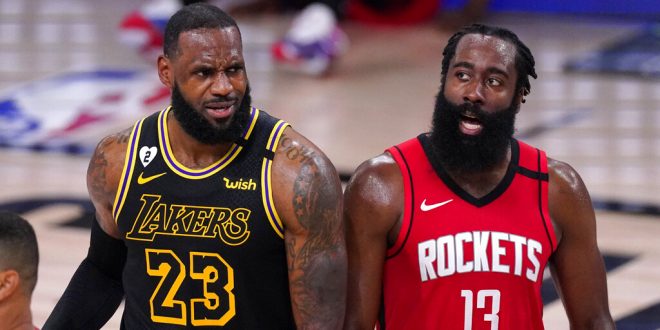 Lakers, Rockets Look To Gain Upper Edge With Series Even

The Lakers and Rockets will battle it out in Game 3 of the NBA Western Conference semifinals to determine who takes control of the series — at least momentarily.

The two Western Conference contenders have split the first two games of the series. The Lakers claiming their most recent matchup 117-109, which leveled the series at 1-1.

The LeBron James-led Lakers have certainly benefitted from the explosive play of Anthony Davis, who has averaged 29.7 PPG in the playoffs. He has also led the Lakers in scoring in five of their seven playoff games.

The Lakers, after shooting under 30% from three-point land and 42% from the field in Game 1, bounced back in Game 2, with percentages of 44% from deep and 56% from the field.

The NBA announced on Tuesday they have assessed a flagrant foul 1 to the Lakers’ Davis. This was after reviewing his contact with the Rockets’ Jeff Green late in the second quarter of Game 2.

LAL’s Anthony Davis assessed a Flagrant Foul 1 upon league review for his contact against HOU’s Jeff Green at 0:15 of 2nd qtr on 9/6/20. pic.twitter.com/NAYSyyugoL

The NBA also assessed Harden with a technical foul from the same game on his drive to the basket as Harden made inadvertent contact to Davis’s face with his elbow after the play had been called dead.

Being down in a series is nothing the Lakers aren’t used to. They ceded the first game in their last matchup with the Portland Trailblazers before winning four consecutive contests to close out the first-round series.

The Rockets are no slouch of a team either. Houston’s backcourt tandem of Harden and Russell Westbrook creates one of the more difficult backcourts in the NBA to defend, something the Rockets used to their advantage in Game 1 when Harden and Westbrook combined for 50 points in the Rockets 15-point victory over the Lakers in Game 1.

Both squads will look to take the upper hand on Tuesday night.