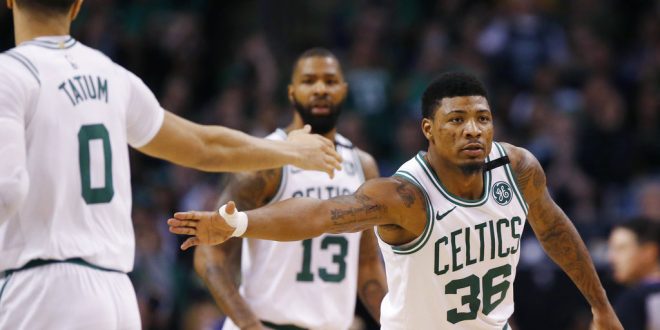 Boston Celtics guard Marcus Smart (36) reaches to slap hands with forward Jayson Tatum (0) during the second half of Game 1 of the NBA basketball Eastern Conference Finals against the Cleveland Cavaliers, Sunday, May 13, 2018, in Boston. (AP Photo/Michael Dwyer)

Celtics Look to Finish Off Raptors

With an exciting evening of bubble basketball ahead, the Boston Celtics plan to end the series with a win over the Toronto Raptors tonight. Boston holds onto a 3-2 series lead and can punch their ticket to the Eastern Conference Finals to face the Miami Heat.

The Celtics look to close the book on Toronto’s season in Wednesday’s Game 6 of the enticing NBA Playoff series. After losing back-to-back games, the Celtics prevailed with a 111-89 victory over the Raptors in Game 5. In this win-or-go-home scenario for Toronto, the team looks to hang onto the thread that’s keeping their season hopes alive.

Raptors Inner Battle On the Court

The reigning NBA Champions look to bring a different mindset as they face a determined Celtics team. With their season on the line, the Raptors remain on the ropes and hope to force a Game-7 match-up. Head Coach Nick Nurse spoke about getting his team into a new rhythm:

Another shocking takeaway from Game 5 was the Raptors’ poor body language. The lack of urgency and lethargic attitude from the team in the second-half sensed that the game was over before it ended. Moreover, they shot 38.8 percent from the floor with star players Kyle Lowry and Pascal Siakam being limited to only 10 points. Instead of jacking up 3-pointers, the team has to be smarter about their shot selection.

Additionally, the Raptors failed to contest their opponents shots. The Celtics managed to average nearly 50 percent shooting against a team that ranked second throughout the regular season in opponent field goal percentage (42.8) defensively. The Raptors need to get into shooters faces if they want to witness a consecutive Eastern Conference Finals appearance.

Boston put up an astonishing defensive performance by holding the Raptors to only 11 points by the end of the first quarter. They ranked third in the NBA in opponent shooting percentage from the floor during the regular season (43.7). In order to come away with a victory tonight, the team has to apply that same lock-down defense the entire 48 minutes.

Tonight’s clash between the Celtics and the Raptors tips off at 6:40 p.m. in Orlando.

The intensified Celtics-Heat rivalry awaits as the world watches for which team continues their NBA bubble journey. Tune in to the anticipated Wednesday night duel to see if the Raptors can force a Game 7, or if the Celtics will send them home to watch the playoffs  from the couch instead.

Angel is a student at the University of Florida. She is a Multimedia Journalist who is currently a Sports Reporter and Writer at ESPN Gainesville. Follow her on Twitter (@angelcwells) and Instagram (@angel_wells). Be sure to follow her NFL Twitter account to stay up to date with the latest NFL news. (@UpToDate1NFL)
@angelcwells
Previous Clippers Look for Two-Game Lead
Next Leonard Fournette perfect fit with Bucs