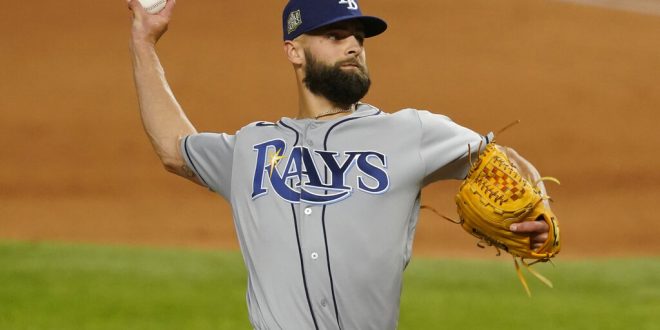 Nick Anderson: The Long Road to the World Series

Rays pitcher, Nick Anderson, made his World Series debut last week, reliving starter Blake Snell. Anderson finished with 1.1 innings pitched and helped propel the Rays to a Game 2 victory over the Dodgers. For Anderson, the path to this stage was a long and difficult one.

Anderson grew up in Northern Minnesota in the small town of Brainerd. From a young age, he had dreams of one day playing in the Majors. Anderson was a star in high school and received a scholarship to play at nearby St. Cloud State University. For the moment, it had seemed all was taking shape for Anderson.

But one day, everything changed.

The Day His Life Changed

In August of 2011, while at St. Cloud State University, Anderson went out with his friends and teammates to a local bar. Late in the night, Anderson received a call from a close friend who found himself in a scuffle. Anderson rushed over for backup, and before he knew it, was flung right in the middle of a full-fledged brawl. Before the night concluded, Anderson found himself locked away, charged with second-degree assault with a dangerous weapon. The weapon? A baseball bat that he found nearby.

Anderson spent the next eight days in jail and was eventually ordered seven years of probation. In addition Anderson was required to attend an Alcoholic’s Anonymous program.

Anderson soon transferred to Mayville State University, an NAIA school in North Dakota for his senior season. There, he started 11 games and went 5-2 with a 1.95 ERA. He was drafted by the Milwaukee Brewers in the 32nd round of the 2012 MLB draft. For a moment it seemed Anderson had turned it around, and his dream could finally be fulfilled.

The Phone Call He Never Received

After hearing the news that he was drafted by a Major League team Anderson was thrilled, eagerly awaiting the phone call from the team. However, the phone never rang. The Brewers found out about Anderson’s arrests and lost interest. So did the rest of the league. This was a shock and a heartbreaker for Anderson, but he refused to give up and let go of his dream.

A Second Chance for the “Tall Drink of Water”

After getting his probation reduced to three years and completing it in 2014, Anderson spent a year modeling houses with his buddies. All the while, he kept the dream in the back of his mind and refused to relinquish his drive.

In February 2015, his opportunity finally came.

Anderson signed up for a tryout camp in Fort Myers, Florida run by former Florida Gator and Chicago Cubs’ scout Nick Belmonte. Belmonte recalls the first time he laid eyes on the 6 foot 5 inch Anderson, “This tall drink of water comes down here and he’s popping 92 to 94 [mph].”

An impressed Belmonte called up Vinny Gantz, manager for the Frontier Greys, a member of the small independent Frontier League, and told him “you gotta see this guy throw.” One look at Anderson and Gantz offered him a contract.

With a contract of just $500 a month, Anderson was unsure what to do. He turned to Belmonte who advised, with no other offers on the table, to take it. Anderson did and ran with it. Anderson pitched an ERA of 0.64, and quickly gained Major League attention.

By August of 2015, Anderson had fulfilled his dream. He reached a deal with the Minnesota Twins and spent the next three years pitching in the Minors.

On Nov. 20, 2018, Anderson was traded to the Miami Marlins and was subsequently added to their 40-man roster.

On March 28, 2019, Anderson made his Major League debut with the Marlins against the Colorado Rockies, retiring the only batter he faced.

Months later Anderson was traded to Tampa Bay. Last week, he pitched in the World Series.

“I’ve had guys in [tough] positions make it to the Big Leagues, but this one is really special,” Belmonte said.

Nick Anderson had goals of playing the Major League, and now has his goals set on winning the World Series.

Catch Game 6 of the World Series on Tuesday night at 8 p.m. on FOX.

Will Levenson is a Journalism and Sports Media major at UF. He produces daily shows for WRUF, including "Sport Scene with Steve Russell," "Harp on Sports," and "The Tailgate." In addition, Will provides weekly sports updates for WUFT News and radio Sportscenters for WRUF radio. Will has been a writer at ESPN Gainesville since September 2019.
@BigWillLevenson
Previous Bears, Rams meet in Monday Night Football
Next Mullen talks returning to practice, Mizzou

There’s nothing Jeremy Schreiber values more than time. People tend to wait around aimlessly for …