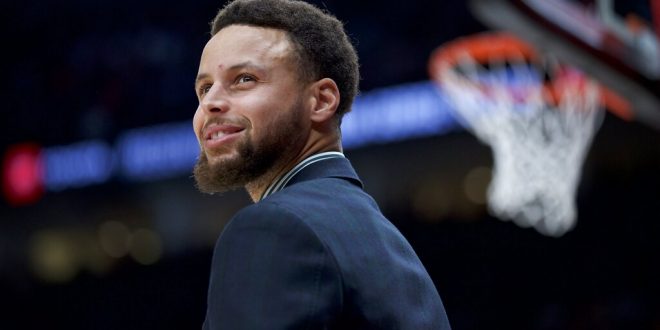 Golden State Warriors guard Stephen Curry smiles from the bench during the second half of an NBA basketball game against the Portland Trail Blazers in Portland, Ore., Monday, Jan. 20, 2020. The Trail Blazers won 129-124 in overtime. (AP Photo/Craig Mitchelldyer)

The Warriors Extension With Curry

December 21 is fast approaching. Steph Curry and the Warriors must reach an agreement on his extension by that date. Will the all-star point guard sign the contract? Curry has said multiple times throughout his career that he would like to finish it with Golden State. So why has he not signed?

Curry talks about understanding the landscape in making his decision. Here are a few things that possibly define what the landscape is. Determining if Curry would perhaps not sign, or why he probably will.

Curry has spent most of his career with Klay Thompson by his side. Thompson is a sharpshooter and a powerful weapon for the Warriors’ offense. The two have even earned the title of “Splash Brothers” because of their three-point capabilities.

The Warriors were without Thompson this past season after he tore his ACL. Now, only a matter of weeks ago, he tore his Achilles tendon and will miss another season.

Curry will have to have to be the lone brother again. He described his teammates’ injury as a gut punch.

While the absence of Thompson could be a reason for Curry to consider not picking up the pen, there are a few new reasons he probably will.

The Warriors had one of the top draft picks this offseason. Enter James Wiseman. The athletic center adds a possible anchor for the Warriors’ offense. Someone who can take some of the scoring pressure off of Curry.

Returning to the Warriors this season is Andrew Wiggins. The former first-round pick is coming back for another run. Wiggins was acquired by Golden State late last season and played a handful of games with them. After bouncing around in trade talks it seems the Warriors will hang on to him.

Curry believes Wiggins can reach his full potential at Golden State and is excited to have him along for the ride.

Curry Went on to tell the media he is excited for Wiggins to have the chance to silence the doubters. If Wiggins does just that, he will be another piece to take the pressure off Curry and give the Warriors an extra boost. Wiggins and Wiseman, as well as Draymond Green, might be the reasons Curry sticks around.

What History Tells Us

Curry is a franchise player and Golden State will do what it takes to keep him. Unless there are other underlying circumstances, fully expect to see Curry pulling up for deep threes in Chase Center this season.