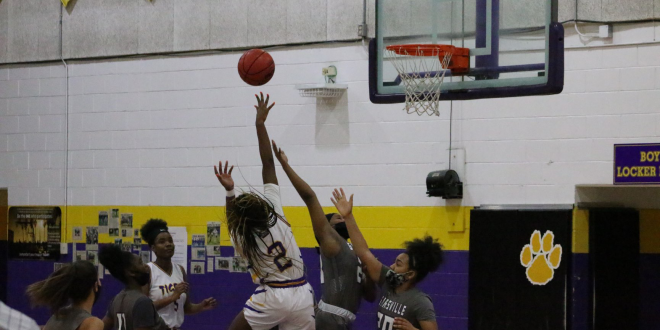 The Columbia Lady Tigers basketball team is held together by the glue that is guard and team-leading scorer, Na’Haviya Paxton. Her strong leadership and floor general mentality played a big role in this playoff win. Paxton’s defense contributed to how the Gainesville High Lady Hurricanes struggled to get on the board in the first quarter scoring only four points. They got into ugly foul trouble with both teams shooting one-and-one multiple times in the first quarter. The Lady Hurricanes deserve a lot of credit, though, for staying close in this one. They came to Tiger Town after only one single day of preparation and no practice after a close win versus Chiles High School in Tallahassee.

Paxton had a solid night resulting in a double-double even though persistent injuries affected her the entire game. She ended her night with 44 points, four assists, and 11 rebounds; earning her 24th career “Player of The Game” title and a playoff victory for her team. As if that stat line wasn’t impressive enough, Paxton scored 68 percent of the team’s total score with those 44 points alone.

Head Coach Anthony Perry is looking forward to hopefully facing off against Buchholz next, as they closely defeated the Bobcats earlier this season. He feels as though the team could do it again.

Buchholz defeated Leon in another narrow playoff victory for the 6A Division, 44-38. Expect nothing less than a showdown when the Tigers face the Bobcats this Friday night. The Bobcats have a similar record sitting at 13-4. Perry’s team says as well that even with the quick turnaround, they are ready for another home playoff matchup.

Previous Some NBA Players Not Sure About 2021 All-Star Game
Next Buccaneers, Chiefs set for Super Bowl Sunday Matchup