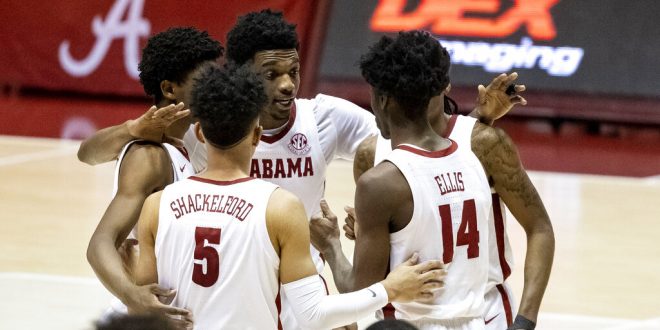 Alabama is putting together one of the best seasons in its program history, but on Tuesday, it faced a test it has yet to combat this season:

The Tide headed into Tuesday’s battle with South Carolina coming off its first conference loss of the season on Saturday at Missouri.

On Tuesday, it passed the adversity test, albeit barely.

Alabama remained at the top of the SEC standings with an 81-78 win over the Gamecocks. The No. 11 Crimson Tide improved to 11-1 in conference play and maintained its lead over No. 10 Mizzou, which is 6-3 in SEC play.

Alabama guard John Petty Jr. is second on the team in scoring at 13.4 points per game, but he had been struggling of late. The senior had scored just 26 points combined in the Tide’s last three games, two of which were losses (to No. 12 Oklahoma and Missouri). Over the last five games, he was averaging under 10 points per game (9.6). On Tuesday, when his team needed him, he reawakened, scoring 20 points.

It was his highest total since Jan. 19. He was succeeded on the box score by guard Jahvon Quinerly, who had 13 points including 10 in the second half. The leader scorer for the game, though, was SC’s AJ Lawson with 21 points.

In the first 5 minutes of action, it appeared that Alabama would fall victim to a pesky Gamecock team, which had already gotten an upset victory of its own six days prior against Florida.

USC exploded out of the gate, jumping out to a 16-5 lead. However, it didn’t take long for the Tide to hit its stride, tying the game at 18 less than four minutes later. From that point, the first half remained evenly matched. Neither team had a lead bigger than five, and Alabama took a 39-36 lead into the second.

However, Alabama remained calm from the charity line, and hit 5-of-6 free throws down the stretch, including two from forward James Rojas with two ticks to clinch the win.

Alabama will return home to face Georgia on Saturday at 3:30 p.m. The Bulldogs face No. 16 Tennessee Wednesday night in Knoxville. South Carolina meanwhile will host Ole Miss, which hosts No. 10 Missouri Wednesday night. Tip from Columbia is slated for 6 p.m.