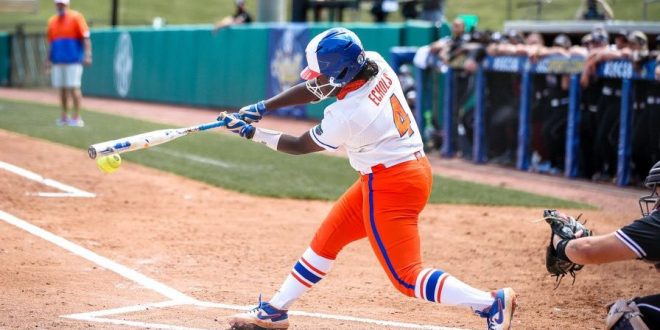 The World Games in softball kicked off from Birmingham, Alabama last week and the Florida Gators have had quite the impact on the softball team.

Gator head coach Tim Walton was selected as an assistant coach, and is joined by current and former Gator players Charla Echols, Amanda Lorenz, and Michelle Moultrie as UF representatives.

And they have arrived in Birmingham on fire.

To read more on Walton’s selection to the coaching staff, click here.

Charla Echols is the only current player on the Florida Gator softball team to have a spot on Team USA. However, she still has some experience at the national level. Echols was a member of the U-19 Women’s Softball World Cup Gold Medal team in 2019 where she featured an incredible .481 batting average.

Amanda Lorenz finished her Gator career in 2019, but had a tremendous impact during her time in Gainesville. She is a former SEC Player of the Year.

Michelle Moultrie has not been with the Gators since 2012, but finished her final season as the SEC Player of the Year and as a top-10 finalist for USA Softball Collegiate Player of the Year. She has had a tremendous career with Team USA, including four World Cup of Softball Gold Medals and an Olympic Silver Medal from the 2020 games.

Coming into the tournament as the number one overall seed, Team USA had high hopes. Here was the seeding and grouping entering the tournament:

The USA team swept through the opening round with victories over group members Italy, Chinese Taipei, and Canada by a combined score of 23-2.

Italy and Canada did not advance past the opening round of the tournament, meanwhile the USA and Chinese Taipei teams advanced into the next round.

The Gator representatives have started out strong in Birmingham. In the opening game against Italy, Lorenz tallied two hits, Echols a hit, and Moultrie two RBIs to go along with one hit.

In the second game against Chinese Taipei, Moultrie and Echols both went hitless. However, Lorenz came through again with two hits and another RBI.

The third game against Canada produced more of the same. All three Gators managed to get on base, with Echols and Moultrie picking up RBIs.

Team USA and Chinese Taipei advanced from Group 1, while Japan and Australia advanced from group 2. Here are the semifinal matchups:

The two winners from the semifinal games will advance to the Gold Medal game Wednesday.