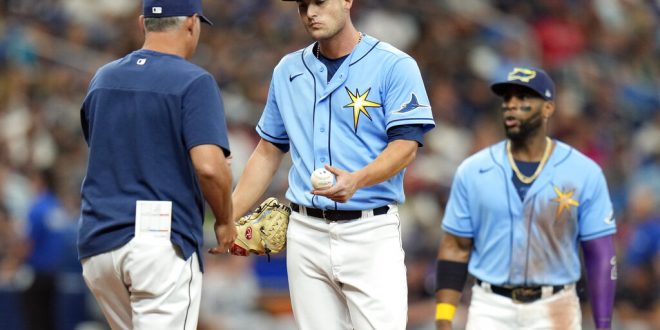 Tampa Bay Rays starting pitcher Shane McClanahan, center, hands the ball to manager Kevin Cash, left, as he is taken out of the game against the Cleveland Guardians during the fifth inning of a baseball game Sunday, July 31, 2022, in St. Petersburg, Fla. Looking on is third baseman Yandy Diaz. (AP Photo/Chris O'Meara)

The Tampa Bay Rays (53-47) will do their best to look forward after losing their last three series, including some tough losses to the Cleveland Guardians.

Since coming out of the All-Star game, the Rays have won just three of their last 10 games. On Saturday, they made the move to acquire lefty outfielder David Peralta from the Arizona Diamondbacks. The Rays would trade catching prospect Christian Cerda in hopes to improve the team now with the team suffering a slew of injuries this season. Injuries have led to an inconsistent lineup throughout the season.

The Guardians would win the rubber match on Sunday. José Ramírez was the difference of the first game, getting a homer with three RBI’s to give Cleveland the 4-1 win. The series would continue on Saturday, with the Rays leaning on big hitters Brandon Lowe and Yandy Díaz to manage a 6-4 win.

In a season of ups and downs for the Rays, they have been able to rely on ace pitcher Shane McClanahan to shut teams down consistently. McClanahan had a 1.76 ERA coming into the game on Sunday. He would finish the game giving up a career-high five runs in 4 1/3 innings. With that win, the Guardians would get their first series win against the Rays since August of 2017.

The Rays have made limited trades so far, but there is still time for them to make a move. The trade deadline ends at 6 p.m. on Tuesday, and the Rays have some prospect capital to help the team. Young star Wander Franco is currently on the 10-day IL and hopefully return to the field within the next month. One of the Rays biggest needs is at catcher with Mike Zunino out for the rest of the season. They have also lost catcher Francisco Mejia as well to injury. There is an opportunity for the Rays to make a splash for Cubs Catcher Willson Contreras or Red Sox Catcher Christian Vázquez.

Going into the next series, the Rays will host the Toronto Blue Jays (57-45). In just a two-game series Tampa would like to build some momentum against a division rival that has been on fire lately. The Jays have won 8 of their last 10 games and hold the top wild card spot in the AL. With the Rays the edge of the playoffs right now this series holds more weight than usual.

It looks like a pitching duel is upon us. The Rays have Drew Rasmussen on the mound in the first game against Kevin Gausman. Both teams will have dominate pitchers on the mound for Tuesdays matchup. Rasmussen will need to be locked in against this Blue Jays lineup that has been explosive all season to say the least. The Rays are not going to be able to rely on the long ball in this game as Gausman has only allowed six home runs in 103 innings pitched. The bullpen play looks to be the deciding factor in that game. 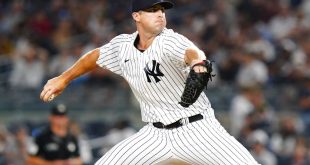