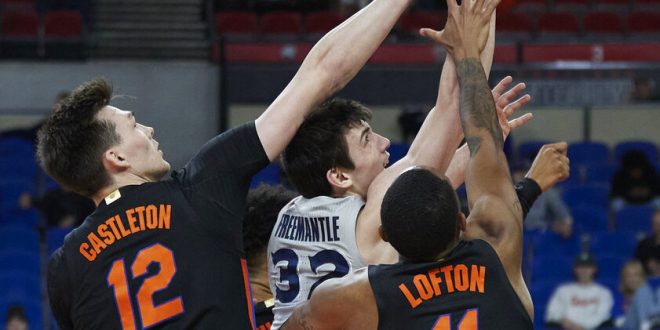 After a bounce back win from the Phil Knight Legacy Tournament against FAMU on Monday, the Gators men’s basketball team (5-3) will face off against the Stetson Hatters (4-2) on Sunday.

While in Portland for the Legacy Tournament, Florida lost two of their three games played. The Gators struggled and multiple questions arose when Kowacie Reeves didn’t receive a substantial amount of playing time.

Along with Reeves, Trey Bonham also had a solid game. Bonham lead the team in scoring with 23 points and went 7/7 from behind the arc.

The Gators will be up against a tough Stetson team. While both teams defeated Florida State, the Gators have fallen to unexpected teams. Florida will need to improve their defensive performance to keep the Hatters from scoring. Stetson has recorded a 49.5% field goal percentage on the year which is 2.5% higher than the Gators’ 47% field goal percentage.

Hatters Off to a Solid start

Unlike the 2021-2022 season, the Hatters so far hold a positive record. Last year, Stetson started out their season 2-4.

In their last game, Stetson beat Johnson University 125-51, shooting 49.5% from the field. In this game, the team broke a couple of school records. Eight Hatters players scored in double digits throughout the matchup. The next record was the largest scoring margin victory in school history.

Look for Stephen Swenson and Wheza Panzo to lead the Hatters on offense. Swenson leads the team in points scored, field goals, free throws, assists and steals. Panzo leads in three-pointers and rebounds.

Tipoff is set for 2 p.m. in Exatech Arena.

Molly is a fourth-year journalism major specializing in sports and media and working on a certificate in sports management at the University of Florida.
@_mollycooper
Previous Former Gators Rising in Today’s NFL
Next Georgia and LSU Clash in SEC Championship