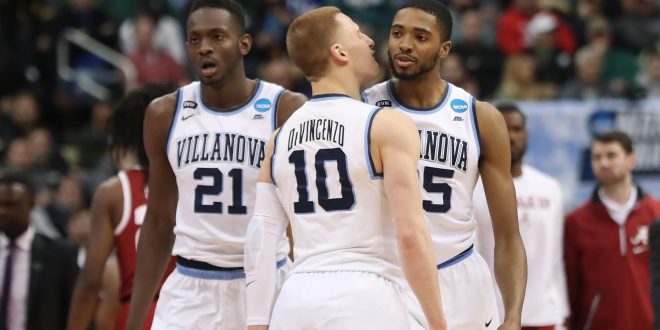 West Virginia and Villanova face off in Sweet 16 Matchup

The Villanova Wildcats will take on former Big East rivals, the West Virginia Mountaineers, tonight in the East Regional semifinals. This will be the first time these two teams face off since 2011 and this time with a spot in the Elite Eight on the line.

West Virginia has advanced to their third Sweet Sixteen appearance in the past four years. They got here through two dominating performances. In the first round, they took down Murray State 85-68. In the second round, they avoided a fourth-seeded Wichita State team that had been upset by Marshall. They took down Marshall rather easily, 94-71.

The Mountaineers are well known for their pressing. The biggest question is whether their press will be effective against a Villanova team that is very comfortable shooting threes. This team relies on their defense led by Jevon Carter, Big 12 defensive player of the year. They rank fifth in the country in steals and they thrive on turning teams over. However, equally important to note is that they rank 300th in three-point defense.

JC is the only player in NCAA Tournament history to have at least 49 points, 13 assists and 11 steals through the first two games of the tournament. pic.twitter.com/Ytwf0aU5EP

In order for West Virginia to reach the Elite Eight, they’re going to have to tame Villanova’s 3-point shooting.

Senior Jevon Carter just came off a 28 point performance against Marshall and 21 points against Murray State. Averaging 17.4 points per game, shooting close to 40% from behind the arc, and totaling 107 steals, they will look to him for leadership on both ends of the court.

Coach Bob Huggins believes his team is not shy of confidence and can pull off the upset.

No. 1 seeded Villanova made the Sweet Sixteen through the way of Radford and Alabama. In the first round, they took down Radford 87-61 and then avoided a repeat of last year’s second-round upset by beating Alabama 81-58.

Villanova ranks first in the nation in offense, averaging 86.9 points per game. They are very comfortable from the three-point range shooting at 40.2 %. So far this tournament, against Radford and Alabama, they’ve totaled 31 threes. The Wildcats are led by a veteran unit, including juniors Jalen Brunson and Mikal Bridges. They lead the team averaging 31.6 and 32.2 points per game and 42% and 44% from three, respectively.

Villanova has 419 3-pt FG this season, the third-most in a single season in Division I history.

They key for them will be to limit turnovers against a team who ranks in the top 10 in turnover margin. However, if the shots start falling for Villanova, it should be enough for the Wildcats to reach the Elite Eight.

The Sweet Sixteen matchup between Villanova and West Virginia will take place tonight at TD Garden in Boston. Tip-off is set for 7:27 p.m. and will be broadcast on TBS.

The winner will move on to the Elite Eight and take on the winner of the Texas Tech vs. Purdue matchup.