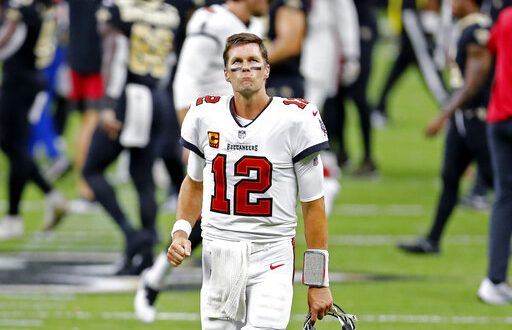 After failing to connect with Cameron Brate well past the first down marker on fourth-and-5, Tom Brady appeared to be befuddled late Thursday night.

The future Hall-of-Famer held up four fingers after the incompletion, as he seemingly attempted to persuade the referees that the Buccaneers’ previous play occurred on third down.

Or, he genuinely thought that the previous play occurred on third down. And that the Buccaneers would have one more opportunity to move the chains on a potential game-winning drive.

But regardless of what took place in Brady’s head, the play did occur on fourth down. And with just 33 seconds remaining in the fourth quarter, and the Buccaneers trailing the Bears 20-19, Tampa Bay turned the ball over on downs.

With that, the Chicago Bears had earned an unlikely come from behind victory. And Nick Foles proved once again to be an Achilles’ heel for the legendary Tom Brady.

The Bears Wake Up

With seven minutes and three seconds remaining in the first half, quarterback Nick Foles led the Bears back onto the field trailing the Buccaneers, 13-0.

To that point, the Bears appeared unprepared and dejected. And some fans on Twitter longed for the return of former starting quarterback Mitchell Trubisky, who was benched two weeks ago in favor of Foles.

That sentiment was understandable.

In the Bears’ offense first three drives, they possessed the ball for nearly seven minutes and ran 14 plays. The results: two punts and an interception.

After scoring just 11 points last week in a loss to the Indianapolis Colts, Bears fans were rightfully irritated by the team’s ineptitude on offense.

But then the Bears woke up from their offensive hibernation.

After Foles trotted on the field, trailing by 13 points, he led the Bears on a 10-play, 75-yard drive that resulted in a David Montgomery rushing touchdown.

On the drive, Foles completed seven of his eight passes for 64 yards. And with one minute and 48 seconds remaining in the half, the Bears only trailed Tampa Bay by six points.

And then Chicago’s All-Pro defensive back Kyle Fuller emphatically changed the course of the game.

Initially ruled an incompletion, Buccaneers’ running back Ke’Shawn Vaughn was eventually deemed to have made the catch before Fuller’s jarring but clean hit forced the ball loose.

Robert Quinn scooped up the fumble on Tampa Bay’s 27-yard line. And the Bears offense saw an opportunity to take the lead with a short field.

After a feeble performance in the first 23 minutes of the first half, the Bears needed just six minutes and 27 seconds to erase a 13-point deficit and take a one-point lead into halftime.

If you’re a fan of stout defenses and minimal ball movement, the second half of this Thursday Night Football game was for you.

On 11 drives in the second half, the Bears and Buccaneers combined for 215 yards.

The Buccaneers punted twice, after accumulating negative yardage on both drives.

But it was Cairo Santos’ 38-yard field goal with 1:13 left in the fourth quarter that proved to be the difference-maker.

While Kyle Fuller undoubtedly owns the defensive highlight of the night, the disruptive play of Khalil Mack cannot go unmentioned.

Khalil Mack and Robert Quinn led a Bears defense that pressured Tom Brady on 43.2% of his dropbacks, his highest rate in a game since 2017.

James Vaughters added another sack for the Bears, as Chicago collectively sacked Brady three times and knocked him to the ground eight times.

The Bears’ defense also added six tackles for loss and a turnover, forced by Fuller and recovered by Quinn.

It’s no secret that an under-manned Tampa Bay offense failed to impress through the air.

Whether Brady’s performance is the result of a stout Bears’ pass defense or simply a regression toward the mean remains to be seen. But his 86.7 quarterback rating aligns more closely with his first two performances in a Buccaneers’ uniform than his last two.

However, despite Brady’s mediocre performance, Bucs’ fans do have reason to feel optimistic.

Ronald Jones II notched his second consecutive 100-yard game, posting 106 yards on 17 carries. He added 19 yards on three receptions and has proven that he is more than capable to lead the Buccaneers’ rushing attack.

Meanwhile, the Buccaneers’ defense played quite well, too.

The Buccaneers held Foles to 243 yards passing and an 83.7 quarterback rating. And they held the Bears’ rushing attack to just 35 yards and 2.5 yards per carry.

The lone interception came in the first quarter when Buccaneers’ defensive back Carlton Davis jostled with receiver Allen Robinson along the sideline. Davis handled a bobbled ball, after Robinson fell to the turf, and returned the interception 34 yards to midfield.

While the Jaguars’ former standout receiver didn’t reach the endzone Thursday night, he did leave his mark on the game.

The Penn State product led all receivers in with 16 targets, 10 catches and 90 receiving yards.

But perhaps his biggest impact came on the Bears’ last scoring drive.

After a Nick Foles call-out at the line-of-scrimmage, Robinson sealed off a defensive back and a linebacker so that Foles could find running back David Montgomery.

The play resulted in a first down. But more importantly, it placed the Bears firmly in field goal range.

The Buccaneers, now 3-2, hope that key offensive pieces like Chris Godwin, Leonard Fournette and Scotty Miller can return to full-health because they host Aaron Rodgers and the Green Bay Packers in week six.

The game, set for a 4:25 p.m. kick-off on Fox, pits Tom Brady against Aaron Rodgers for the third time, with the two all-time greats splitting the first two games.

Meanwhile, the Chicago Bears, now 4-1, prepare for another NFC South opponent, as they head to Carolina to take on Teddy Bridgewater and the Panthers.