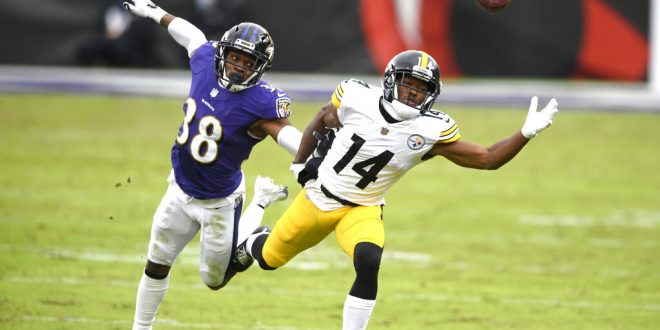 A wild day in the NFL concluded last night with the Philadelphia Eagles capturing sole possession of first place in the NFC East. Philadelphia pulled out a  23-9 win on Sunday Night against their divisional foe, the Dallas Cowboys. The Eagles improved to 3-4-1 and Dallas fell to 2-5.

The Pittsburgh Steelers now own a league-best 7-0 record following an impressive 28-24 victory over rival Baltimore Ravens. Steelers’ defensive back Minkah Fitzpatrick knocked a pass away in the end zone on the game’s final play, sealing Pittsburgh’s signature win. The Ravens fall to 5-2 as Pittsburgh holds a 2-game lead over Baltimore in the AFC  North.

While this win feels good for now, Steelers Head Coach Mike Tomlin acknowledged that, with 9 games still left to be played, more challenges lie ahead.

Pittsburg will travel to Dallas next week for a date with the Cowboys.

The now 6-1 Kansas City Chiefs had no trouble with hapless 0-8 Jets, dominating throughout and prevailing 35-9.

A Cam Newton fumble in the final minute gave the Bills a victory over divisional rival New England Patriots. Buffalo improved to 6-2 with the 24-21 win, currently standing 2-games ahead of Miami for first place in the division.

The Seattle Seahawks’ prolific offense once again displayed its prowess, capturing a 37-27 victory over the San Francisco 49ers. Seattle is now 6-1 and ranks 1st in points scored per game and 3rd in yards gained per game.

These four teams sit atop the NFL as the only with 6 wins thus far.

No Lack of Upsets

Despite many of the league’s best taking care of business, Sunday did see its fair share of upsets.

The Green Bay Packers entered Sunday with a 5-1 record and were double-digit favorites in a home matchup with the 1-5 Minnesota Vikings. Green Bay’s defense struggled to the ground game, surrendering 226 scrimmage yards and 4 total touchdowns to Minnesota’s star running back Dalvin Cook.

Down south in Miami the 5-2 Los Angeles Rams came into town as 3-point favorites against the 3-3 Miami Dolphins.  Dolphins rookie quarterback and 5th overall pick, Tua Tagovailoa, made his first career start. Tagovailoa completed 12 of 22 passes for 93 yards and a touchdown as the Dolphins were outgained 471 to 145. The Rams totaled 23 more first downs and ran 44 more plays. Statistically, this game had the look of a Rams’ beatdown.

Instead, the Dolphins, thanks in large part to a defensive touchdown and punt return touchdown, upset Los Angeles 28-17. The Dolphins now improve to 4-3 and currently own the league’s first-ranked scoring defense, giving up just 18.6 points per game.

Despite getting a big victory over a good team, Tagovailoa admitted that there is plenty of room for improvement.

Finally, in Cincinnati, the Bengals shocked the first-place Tennessee Titans with a stunning 31-20 home victory. Former first overall pick and Bengals’ rookie quarterback Joe Burrow secured his second-career victory, finishing with 249 yards passing with 2 TDs. Cincinnati improved to 2-5-1 with the win and Tennessee fell to 5-2, losing their second game in a row.

Will Levenson is a Journalism and Sports Media major at UF. He produces daily shows for WRUF, including "Sport Scene with Steve Russell," "Harp on Sports," and "The Tailgate." In addition, Will provides weekly sports updates for WUFT News and radio Sportscenters for WRUF radio. Will has been a writer at ESPN Gainesville since September 2019.
@BigWillLevenson
Previous Brady, Bucs take on Giants in Monday Night Football
Next Gators Soccer Struggles with a 1-4-1 Record