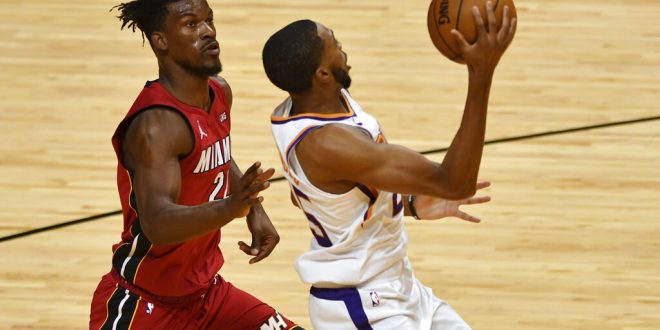 The Miami Heat have been busy. They have trade rumors, lost one game over the course of a month, and are making history renaming their arena.

Over almost a month’s time, the Miami Heat went on an 11-1 winning run. This run started with a win over the Sacramento Kings on Feb. 18. Since their 11th win in that stretch on Mar. 16, the Heat have gone 0-4, starting with a loss to the Grizzlies.

31-year-old Jimmy Butler was a big part in the 11-1 stretch. Over the 10 games he played in those 12, Butler led the team in points seven times, in assists seven times, and in steals six times.

The Miami Heat’s arena has negotiated a naming-rights deal with cryptocurrency exchange FTX. The deal is worth $135 million.

FTX becomes the first cryptocurrency exchange to sponsor a major US sports venue.

NEW: The FTX cryptocurrency exchange negotiated a $135M naming-rights deal for the @MiamiHEAT’s arena under a county deal that would reserve the sponsorship money for combating gun violence and poverty in Miami-Dade, documents released Tuesday show. https://t.co/58vCi2k25K

Soon, the Miami Heat are planning to introduce vaccinated-fan-only sections in the arena. These sections are planned to be in effect starting April 1. The fans will sit with their group with just one seat in between groups.

Heat announce plans to have vaccinated-fans-only sections at upcoming home games, starting April 1. They are the first NBA team to announce such a plan.

Fans will have to provide a Center for Disease Control vaccination card and a valid ID. Fans have to get the vaccine 14 or more days prior to attending in these sections.

“You’re already getting a sense that things are starting to change and go in a much more positive direction,” Heat coach Erik Spoelstra said.

The NBA Trade Deadline is Thursday. The Miami Heat, like many years, are in trade rumors for multiple players.

Six-time all-star Kyle Lowry and two-time all-star Victor Oladipo, among others, might be heading to Miami by the end of the week.

With just under two days until the deadline, it remains to be seen what happens for the Heat.

Now, they sit at the fifth seed in the eastern conference. This would land them a guaranteed seat in the NBA Playoffs.

Jensen Young is a journalism student at the University of Florida. He works as a sports writer for WRUF.com and is the voice of trendings on Wednesday mornings on the WRUF radio station.
@Jensen_Young9
Previous Lightning Secure the Win Against Rival Stars
Next NCAA Women’s March Madness Roundup