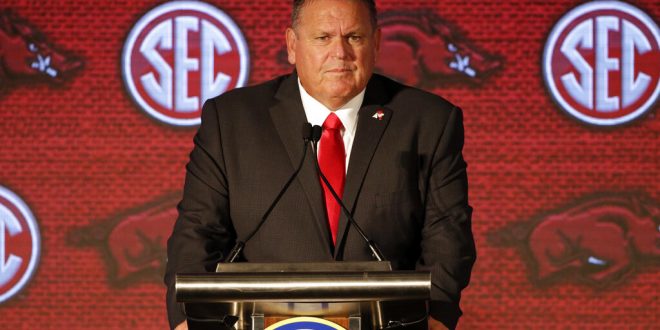 The Arkansas-Pine Bluff Golden Lions are hitting the road to face the Arkansas Razorbacks.

Pine Bluff is 1-5 on a five-game losing streak, coming off a game against Southern University.

Arkansas on the other hand is 4-3 on a three-game losing streak to SEC opponents Georgia, Mississippi and Auburn.

The Golden Lions started the season strong with an at-home win against Lane College 34-16.

It has been downhill from there.

In game two, they suffered a defeat to Central Arkansas 45-23.

In their matchup with Alcorn, Pine Bluff closed the point gap, but still fell short. An at-home loss 39-38 after defensive breakdowns in the last quarter.

Game four did not bring the Golden Lions any good news as they were taken down by Prairie View A&M 27-17.

Their trip to Montgomery, Alabama proved unfruitful as well, losing 35-15 to Alabama State.

Finally, in last week’s game against Southern University, Pine Bluff polished off their 1-5 record with a loss 34-7.

The Razorbacks have had a slightly more successful run with a four-game win streak to begin the season.

For their season-opener, Rice travelled to Fayetteville only to lose to Arkansas 38-17.

In another at-home matchup, the Razorbacks took down Georgia Southern 45-10.

Texas A&M was the fourth and final victory for Arkansas. The No. 7 Aggies fell to the Razorbacks 20-10.

The tides shifted in Arkansas’ game against the undefeated Georgia Bulldogs. On the road in Athens, the Razorbacks suffered a shut out to the Bulldogs 37-0.

They put up a fight against Ole Miss and came close with only a 52-51 loss in Oxford.

Finally, last week they were taken down by Auburn at home 38-23.

Head coach for Arkansas Sam Pittman said he is excited for this in-state game, that has been a tradition for many years.

He said that while the team is not thrilled with its record, it is resilient and will keep playing strong.

Pittman said this game will be important for the state of Arkansas as a whole and is ready for Saturday.

Pine Bluff will be hosting the Razorbacks this Saturday at Little Rock. Kickoff is slated for 11 A.M. and can be seen on the SEC Network.

Rylee is a fourth year journalism major with a specialization in sports and media at the University of Florida College of Journalism and Communications.
Previous Myreon Jones excited to join Gators Hoops
Next LSU and Ole Miss Football Meet For SEC Showdown on Saturday