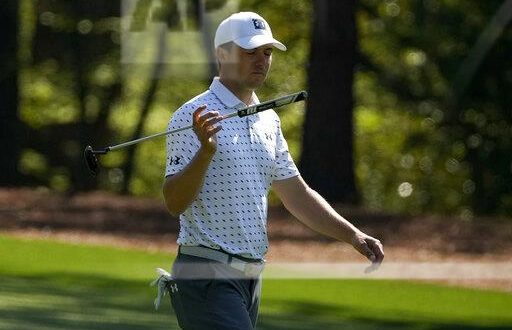 Jordan Spieth walks to the green on the 11th hole during a practice round for the Masters golf tournament on Tuesday, April 6, 2021, in Augusta, Ga. (AP Photo/Charlie Riedel)

It’s April and the Masters in Augusta, Georgia is finally underway. The Masters will be bringing back normalcy again as the azaleas will be blooming and fans will be on the ground to spectate. Let’s take a look at some of the top prospects for this week’s event.

Jordan Spieth is the unanimous pick for golf fans. However, Spieth has been having some trouble as he hasn’t won a tournament in more than three years. Thankfully, that drought is over as he won by two strokes over Charley Hoffman in the Valero Texas Open. It was his first victory since the Open Championship at Royal Birkdale in 2017.

Spieth still hasn’t missed the cut in his seven Masters appearances, finishing outside of the top 11 only twice. Spieth will tee off alongside Cameron Smith and Collin Morikawa at 2 p.m. ET on Thursday.

Dustin Johnson shot 20-under-par 268 to set a new tournament record and beat Cameron Smith and Sung-jae by five shots. Ranked no. 1 in the world, the defending champion of the event is looking to become the fourth golfer to win back-to-back green jackets.

Johnson has five straight top 10s in the Masters and has only lost to Tiger Woods in his last two innings. Johnson will tee off alongside Lee Westwood and Tyler Strafaci at 10:30 am ET on Thursday.

Bryson DeChambeau contended as an amateur in 2016 and briefly co-led in 2019 before Tiger Woods went on to win. Coming off of a T3 at The Players and winning at the Arnold Palmer Invitational, it is safe to assume that DeChambeau will post his best finish ever at the Masters.

For this year’s Masters, DeChambeau is showing up with a new Cobra driver tailored specifically for him, as he is averaging 320 yards, the best on the PGA Tour. DeChambeau will tee off alongside Adam Scott and Max Homa at 1:36 p.m. ET on Thursday.

The 85th Masters will be broadcasted on CBS, with early TV coverage from ESPN. ESPN will begin on Thursday, broadcasting the opening round and then the second round on Friday. CBS will begin on Saturday with with four hours of coverage, followed by five hours on Sunday for the final round. Extensive coverage can be viewed online via ESPN+, Masters.com and the Masters app.