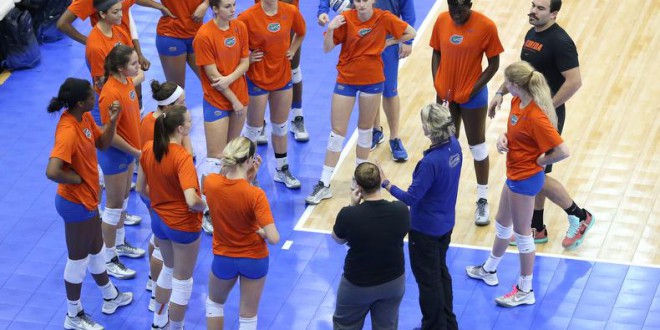 The Florida Gator volleyball team prepares for their game tonight in Texas. Courtesy of Gatorzone.com

Earlier this year, instant replay was proposed for the NCAA Tournament in the sport of volleyball. Florida volleyball coach Mary Wise recognized that this change was necessary for the future of the sport, but voiced her opinion that only certain schools could actually implement the necessary technology in time for this year’s tournament.

After winning the first set of the night, the Orange and Blue dropped two, giving the Longhorns an advantage at home. Despite the roaring crowd and cramped atmosphere, Wise’s Gators fought back hard and took the fourth set.

However, going into the Elite Eight, the 11th ranked Gators had only won a single five-set match all season, despite six attempts at it. Florida had already overcome adversity –  the Gators beat the Longhorns in Austin earlier this season and their previous tournament match was the five-set victory over number six Wisconsin.

It was all coming together for the Gators, until one blown call changed the course of the game.

Remember: This is "out" in Austin. pic.twitter.com/gH0n6i1JTG

Down 6-7, Florida’s Carli Snyder sent a ball in past the Longhorn defense. However, the line judges called the ball out, handing Texas an 8-6 lead and forcing the teams to switch benches.

ESPN commentators and fans could clearly see the call was wrong, but nothing was done.  The line judge, the top official, could have overruled the call but that did not happen.  With no replay system in place, the errant call stood and social media sites erupted with a collective outcry from the Gator faithful, expressing how unfair the call was.

The momentum changed instantly and Texas eventually led the Gators 11-7.

Surprisingly, Florida rallied back and even took a 13-12 lead, but the Longhorns won to advance to the Final Four.

Tied up 15-15, Florida gave up two kills to Paulina Cerame and just like that, its season was over.

After the questionable call in the fifth set, Wise thinks this game will bring attention to the need for rule changes in volleyball.

Looking forward, the Gators will still have an enormous talent back in sophomore hitter Rhamat Alhassan, who finished the night with a game-high 19 kills. For the five Gator seniors, it was a heartbreaking way to close out the season.