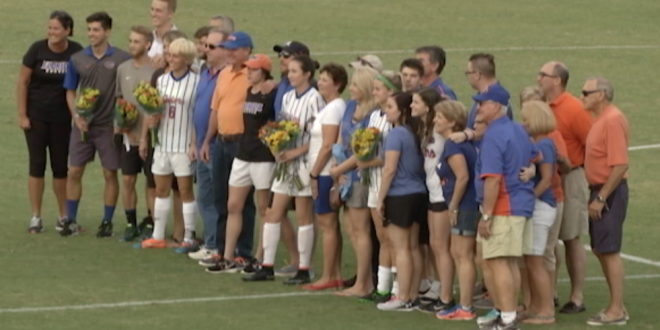 The eighth ranked Florida soccer team defeated Arkansas 4-0 on Senior Day in the regular season home finale on Sunday. Before the match defender Claire Falknor, defender Christen Westphal and midfielder Lauren Smith were all honored and celebrated in their final regular season game at home.

Gator forward Savannah Jordan said it was nice to send the seniors out with a win.

“I think it’s great, especially with the shutout. All three of them are more defensive players; Lauren still plays in the back some, even holding mid, and Christen and Claire are centerbacks for us, so I think it’s huge to have a shutout for them today and especially the win as well.”

The first half of the match was quiet as both teams looked to score, but couldn’t find the back of the net.

Immediately after halftime Florida got on the scoreboard when forward Brooke Sharp tapped in a rebound from three yards out to open the scoring as the Gators led 1-0 at 45:57. The goal was also the quickest goal to start a half in 2015.

Less than 10 minutes later forward Savannah Jordan headed in a corner kick from senior defender Christen Westphal as the Gators extend their lead to 2-0. On that goal Westphal notched her 10th assist of the season as she leads the team and conference is assists and half of those assists have been on Jordan goals.

Later in the match Florida started a counterattack as goalkeeper Kaylan Marckese passed the ball out to midfielder Briana Solis. Solis ran with the ball from the Gators half of the field into the Arkansas penalty box where she scored from eight yards out to increase the Orange and Blue lead to 3-0 over Arkansas in the 72nd minute.

Marckese becomes only the third UF goalkeeper to be credited with an assist. The other Gator goalies that notched an assist were Brittni Goodwin (2003-06) and Taylor Burke (2011-14). Each recorded two assists in their careers as UF goalies. Marckese also had six saves in the match which sets her career high for saves in a match.

Florida’s final goal of the match was when midfielder Betsy Middleton sent a pass to the far post where Jordan slotted the pass into the net as the Gators led 4-0 at 72:21. Jordan had two goals on the night as she leads the team and conference in goals with 17 on the season.

The shutout is Florida’s first shutout at home while the other two came at UCF (August 21) and at Jacksonville (September 13).

“I’m so excited we got a shutout. It was a really good team win. Arkansas is not an easy team to play against. They present a lot of different problems that we really haven’t seen as much of this year, so for our team to come out with a convincing victory is a really good step for us.”

Next up for the Gators is the final regular season game at Georgia on Thursday, October 29th.