After rounding out non-conference play with a 10-2 record and a 79-58 win over Yale on Sunday, the Florida men’s basketball team is opening conference play tonight at home against the Georgia Bulldogs.

Senior point guard Kenny Boyton had a huge night against Yale, going 9 of 12 from the floor, including 8 of 10 from the three point line giving him the new title of Florida’s all time three point leader with 290.  Boyton talks about how he got out of his slump against Yale.

After going 7-0 to start the season, the Gators dropped two to Arizona and Kansas State. Head coach Billy Donovan says the maturity on the team helps the Gators not get down when they lose a game.

Going into tonight’s game, Georgia enters the SEC season with a 6-7 record and comes in on a four game winning streak, most recently a 52-41 victory over George Washington.

The Bulldogs are led by Kentavious Caldwell-Pope, who averages 17.5 points and 7.2 rebounds per game, both team highs. Boyton talks about Caldwell-Pope and his strengths.

The Gators are 7-0 under Donovan when their SEC opener is at home. Going into conference play, Donovan says he has been training the team intensely so they won’t give up down the stretch. 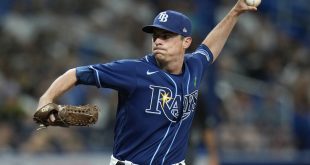 After dropping the first of their four-game set with the Yankees, the Rays look to …